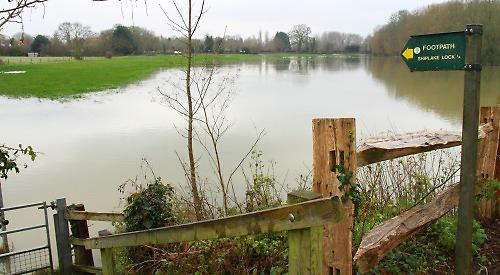 PLANS to drain surface water from a new housing development into the River Thames could increase the flood risk at green spaces in Henley, the town council has warned.

Councillors expressed “shock and concern” at the proposal by Taylor Wimpey and agreed to hire experts to assess how severely the drainage scheme would affect public land by the river.

They also urged residents to express their views when the plans are submitted to South Oxfordshire District Council, the planning authority.

Taylor Wimpey has permission to build 95 homes at Thames Farm, a 5.7-hectare field about a mile to the south of Henley, off Reading Road, near Shiplake.

But construction hasn’t started because the developer learned the land is prone to developing sinkholes and it needs to reinforce the chalk bedrock with grout injections.

The developer wanted to pump surface water into Lash Brook, a backwater of the Thames at the southern outskirts of Lower Shiplake, by installing new pipework beneath the village centre but scrapped this plan after residents protested, saying it would make an existing flooding problem even worse.

Now Taylor Wimpey is proposing to divert the surface water along a culvert beneath Reading Road towards Henley, then into the Thames via the River Harp, a small tributary running along the boundary of Sheephouse Farm and the Jubilee Park sports ground, which the town council owns and is used by AFC Henley and Henley Hockey Club.

Taylor Wimpey says this would only marginally increase the flood risk both there and at Mill and Marsh Meadows and the Mill Lane car park further downstream, which are already flood-prone.

But members of the council’s finance strategy and management committee criticised the company for not discussing the plan with them and said that it had conducted surveys at the sports ground without permission.

They resolved to seek advice from drainage engineers and might even ask Taylor Wimpey to pay the cost of this. Councillor Stefan Gawrysiak said: “We are the landowner and should make it loud and clear that this drainage scheme shouldn’t happen.

“It’s absolutely shocking and councillors must bear in mind… the housing only got permission on appeal in 2018 because, at the time, the district council was just two units below its target for a five-year land supply. It got through on the narrowest margin.”

Councillor Will Hamilton said: “This is their second hash at a bad plan and we must stand up to them — it’s their problem and they can’t make it ours.

“They just need to stop being so greedy. With so many new driveways, there would be a lot of oil run-off onto our sports pitches.

“If they still want 95 homes they should appoint a hydrologist to propose a solution using only their land.

“One answer could be a holding tank with a filtration system so water could be fed back for gardening, although it wouldn’t be for drinking.”

Councillor Ian Reissmann said: “This is a failure of the planning system — it’s the complete opposite, a lack of planning. How can you approve a housing plan without a clear vision for drainage?”

Mayor Ken Arlett, a retired builder, said: “I’m annoyed they didn’t even contact us to survey Jubilee Park. They went through someone at AFC Henley, which shows what we’re up against — perhaps they’re not honest.

“We’re looking at building a new all-weather artificial pitch on Jubilee Park and the last thing we want is to make it a floodplain.

“I don’t believe they’ve contacted residents of Mill Lane either and they have enough trouble with flooding now. Taylor Wimpey should take its water somewhere else — they bought the land so it’s their problem.

“A consultant could cost us a considerable amount of money so they should pay.”

Cllr Reissmann added: “It’s reasonable for us to seek compensation as they’re planning to profit.”

Thames Farm, which will be rebranded as Regency Place, is in Harpsden parish but wasn’t earmarked for development in the joint Henley and Harpsden neighbourhood plan.

Taylor Wimpey says drainage is needed to prevent flooding of the main road and homes opposite.

It developed its new drainage strategy working with the Environment Agency and Thames Water.

The company says this would reduce flooding in the area of Thames Farm with only minimal impact on Henley Town Council’s land, which is why it hasn’t yet spoken to the council but it would gladly do so.

Taylor Wimpey says its consultants obtained permission from all the landowners where surveying was carried out.

A spokeswoman said: “Following feedback from the local community, we’ve been working closely with specialist consultants to review a number of alternative drainage strategies for our development off Reading Road in Shiplake.

“We are confident that we have found a viable solution and we will continue to listen to feedback from the local community, including Henley Town Council.

“We will consider all comments received before we finalise and submit our revised strategy to South Oxfordshire District Council at the end of March.”