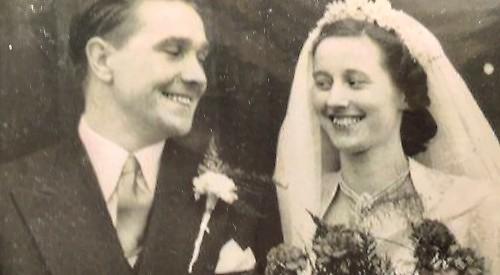 A COUPLE celebrated their platinum wedding anniversary on March 31.

Freda and Eric Davis have been married for 70 years and have lived in Plowden Way, Shiplake, for the last 64 years.

Mr Davis, 94, has lived in the village for most of his life.

His wife was evacuated from Dagenham to Wargrave during the Second World War and that is how the couple met. Mrs Davis, 92, said: “The first time I saw him was by the river in Wargrave. I was 16 and he was almost three years older than me.”

The couple were married in Essex and spent their honeymoon in Devon.

Mrs Davis said: “It was a very nice day and we were so happy.

“Over 70 years, we have never quarreled. Of course we have had little arguments like everybody does, but it has been 70 years of peace.” She said they had enjoyed living in Shiplake, adding: “It used to be a small and quiet village for many years.”

Mr Davis worked as an engineer at Stuart Turner in Henley and Mrs Davis was the caretaker at Shiplake Primary School.

They were both members of Shiplake Bowls Club.

They have two sons, Terry, 67, who lives in Tilehurst, and Michael, 64, who lives in Caversham, as well as two granddaughters and four great grandchildren.

Michael Davis said: “It’s just amazing that they still live in our family home. My brother and I loved living there.

“They live there by themselves; they are still so independent.”

The family could not hold a big celebration because of the coronavirus restrictions but said they hoped to do so in the summer.