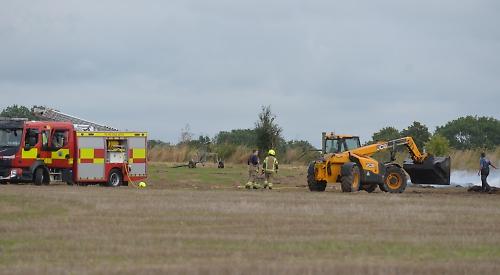 A FARMER has praised the quick response of the fire service after he lost £4,000 worth of straw in a suspected arson attack.

Several crews were sent to a field off the Henley-Reading road near Shiplake Row at about 9pm on Wednesday last week after a resident raised the alarm.

The fire was in a huge stack of bales of linseed straw and the firefighters worked through the night to subdue the flames, which could be seen from as far away as Wargrave. The last crew didn’t leave until 9am the next day.

The fire destroyed 200 tonnes of straw which was due to be sent to a power station to be used as fuel.

The field is part of Shiplake Farm, which is owned by the Phillimore Estate and is run by Stephen Doble, whose family have farmed on the land for more than 115 years.

Mr Doble said: “One of our neighbours raised the alarm at 9pm and the fire service arrived within six minutes.

“In the early stages, there was just no point trying to put it out — it was just impossible.

“The fear was the embers blowing from an area where the fire wouldn’t spread to somewhere that it could have done.” Fire appliances came from Didcot, Wallingford and Watlington along with crews from Reading and Bracknell.

Mr Doble said: “I’m incredibly grateful to the fire service for working so hard. They were brilliant and they are an absolute credit to their profession.

“We used a JCB in the morning to get the remnants burned out so that the fire didn’t smoulder all day.”

Liam Simpson-Trotman, who runs the nearby Orwells restaurant with his husband Ryan, saw the blaze from his kitchen window.

He said: “We saw this massive orange flame go up into the air and we knew pretty much straight away how bad it was. He contacted Stephen straight away but he said he was already on it. Within 10 minutes the emergency services were there.

“We weren’t concerned because Stephen cultivates the land next to ours within the first few days [after harvesting] and the wind was not blowing in our direction.

“I was devastated for him. He works so hard, particularly at this time of the year and he really does not deserve this.

“He is a small independent farmer and they work really hard, so when you see his livelihood go up in flames it is pretty horrible.”

Mr Doble said he was working with police in a bid to catch whoever was responsible. He said: “I don’t know if they feel like they had a vendetta, or if they just did it for fun, but it really is not a nice feeling for me.

“We were very lucky that they lit a fire in the linseed. If they had lit that in a field of wheat then it would have been a very different scenario.”

In July 2018, about 60 firefighters tackled a blaze which destroyed 20 hectares of arable land at Shiplake Farm during a hot, dry spell.

The fire broke out after farm machinery caught alight and quickly spread to an adjacent field as a result of strong winds.

A straw bailer, cultivator and water bowser were destroyed.