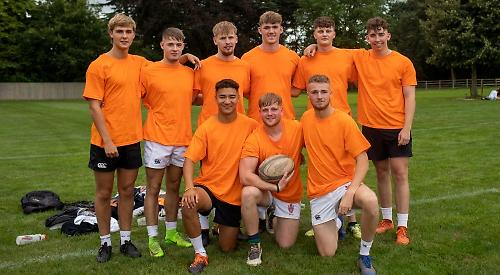 A FUN dog show and touch rugby tournament returned to Shiplake College after a year off.

Fieldfest, which was cancelled last year due to the coronavirus pandemic, was attended by pupils, staff and parents.

There were 60 entries in the dog show, which was compered by Nick Brown, deputy head of pastoral, in a dog costume. The guest judge was Karole Roberston, owner of dog grooming parlour Naughty Mutt Nice in Duke Street, Henley.

It was won by the class of 2020 leavers, led by Charlie Ambrose McCormack, who beat another team of Old Vikings led by Cameron Grossman. The winners’ medals were presented by headmaster Tyrone Howe.

Other attractions at the event included face painting, inflatables and a beer and Prosecco tent.

Alumni and events officer Catherine Brazil, who organised the day, said: “It was an absolute joy to finally be able to welcome visitors back on site for a social event at the college after the year we have had.

“Thank you to everyone who came along and to all the dogs for being so well behaved. It really was a fantastic way to kick-start the academic year.”