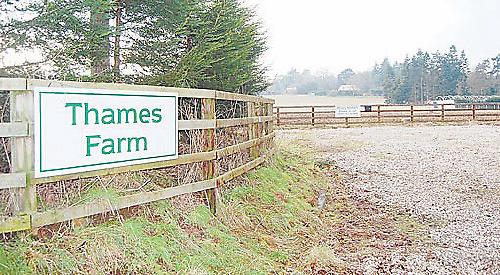 RESIDENTS are demanding that a developer is not given permission to carry out groundworks for 95 new homes.

Taylor Wimpey was granted consent to build on the former Thames Farm, off Reading Road, Shiplake, on appeal and has now applied for a certification of lawfulness, which would allow it to fill weak spots in the ground to prevent sinkholes.

The company argues that it has the legal right to go ahead with the work under its original planning permission and the certificate of lawfulness would recognise this.

It was due to make a decision on the certification of lawfulness application this week.

The Thames Farm Action Group, a campaign group made up of villagers, has urged the council to stick to its position to ensure the proposed groundworks receive proper scrutiny.

It claims the filler grout might contain fly ash, a by-product of burning coal to generate electricity, and fear this could leak into an aquifer running beneath the site which supplies Shiplake’s drinking water.

Taylor Wimpey has also submitted a construction management plan for approval but the council has said this will not be considered until after the certificate of lawfulness has been decided on.

In a letter to council planning officer Emma Bowerman, action group chairman Peter Boros said: “Our reason for saying that planning permission does not exist for the groundworks is that at the time the application was submitted, there was no knowledge of the existence of sinkholes and dissolution features on the site. If these groundworks were not contemplated at the time the application was submitted and then determined, nor were they referred to in any plans, reports, designs or other submissions, the works cannot have been approved.

“The planning authority and the appeal inspector will all have assumed that this was good building ground not requiring any special treatment or consideration. That was not correct.

“The additional works are of such magnitude and importance, with such wide-reaching impacts, that they cannot simply be ignored or pass through the system without proper scrutiny.”

He said that a fresh application would mean the plans could be scrutinised by the Environment Agency.

He cited section 55 of the Town and Country Planning Act 1990, which states that “engineering operations” such as groundworks constitute development.

Taylor Wimpey argues that it is not fresh development and the work can be carried out under discharge of conditions.

Mr Boros said that legal advice submitted by the company implied that the ground stabilisation work was part and parcel of constructing foundations but it was not.

He said: “Works of this nature cannot simply escape the entire planning system by the suggestion that a consent to build also gives the right to indiscriminate works below ground to any level or depth that may be necessary.

“We know that this process is lengthy and tiresome but unfortunately we have no control over the submissions that Taylor Wimpey chooses to make, which has been a relentless effort to avoid having to make a completely new application.”

Henley Town Council, Shiplake Parish Council the Henley Society and more than 70 residents of Henley and Shiplake have objected to the applications.