Village quiz is first fundraiser at hall since pandemic 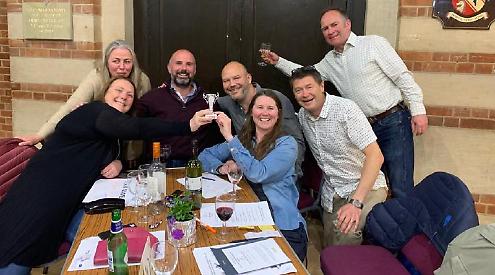 SHIPLAKE’S annual quiz night was held for the first time in more than two years following the coronavirus pandemic.

Ten teams comprising 72 players took part in the event, which was held at the memorial hall.

The quiz had a jubilee theme, with purple and silver decorations and a round of questions on “Philip and his friends”.

They received a gold trophy and individual medals with purple ribbons.

They had an impressive final round when they played their “joker” and jumped from eighth place to second to secure the silver trophy. Quizmaster Mark Manson oversaw eight rounds of questions and a separate word challenge, which was won by The Commoners. Their prize was three large platinum jubilee chocolate bars. The Women’s Institute team won the prize for the best team name of Women’s Intuition.

The quiz organisers thanked local businesses such as Manning UK, the Henley Distillery and Cote restaurant as well as the Kenton Theatre for providing prizes for the raffle.

A total of £1,021 was raised from ticket, raffle and bar sales, which the hall’s management will put towards replacing all the dated crockery in the kitchen in the hope of attracting bigger functions.

There was also a collection for the Disasters Emergency Committee’s Ukraine appeal, which raised £94.

Hall manager Lottie Pheasant said: “I’m so pleased that we were able to host our first fundraiser since covid and see so many people of all ages back in the hall enjoying themselves.

“Shiplake Memorial Hall is a wonderful community asset and we rely heavily on fundraising activities, so these events are incredibly important.”