Where are police say pair after driver hits plant stall 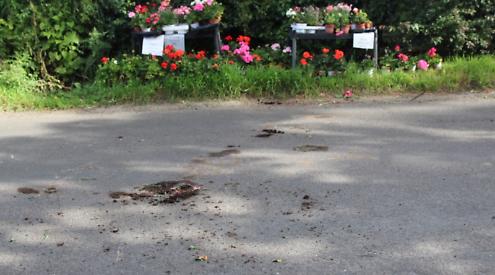 A COUPLE have called for police to do more to tackle speeding after their plant stall was hit by a passing car.

Val and Chris Neal believe the culprit may have been a driver who was accidentally sprayed with a hose while Mr Neal was out watering.

The couple sell flowers from the verge outside their home in Memorial Avenue, Shiplake.

They were woken up early one morning recently by a loud bang and discovered the stall had been struck by a vehicle and flowers strewn across the road.

Mrs Neal, 83, said: “I actually heard the bump at 6.45am. I thought something had happened next door. It sounded as though someone was throwing something at the door, hard.

“Chris came down to check the door, then went out to check the plants. The ones that were hit were all down the road, squashed flat.”

The couple, who have lived in the street for 50 years, began offering flowers in return for small donations several years ago and have built up a loyal group of customers. Mrs Neal said: “It’s a hobby to help out my pension.

“I only sell them during the summer, from May to early July. I have a lot of customers who come back year after year. It keeps me going and keeps me out of the funny farm.”

The couple say that three to four trays containing a dozen or more plants were destroyed in the incident on Thursday, June 16.

Mr Neal, 79, called the police non-emergency number 101 and spent more than an hour on hold before hanging up to go to his part-time job as a medical supplies delivery driver.

His wife said: “It is not everyone that speeds — we have an awful lot of people who obey the 20mph limit. It is morning and evening when drivers put their foot down. In the morning it is just whoosh, whoosh, whoosh.”

Mr Neal said he’d had some minor altercations with speeding drivers in the past as he waved at them to slow down and one of these could have led to the plant stall being targeted.

In this incident, he was watering the plants when he inadvertently sprayed an offending driver with the hose as he turned to find the vehicle’s window open.

The road has a 20mph speed limit as both Shiplake Primary School and the Memorial Hall are there and many of the residents are elderly.

The couple believe that Thames Valley Police are not interested in enforcing such limits.

Mr Neal said: “There was a statement from the police in the Henley Standard a couple of weeks ago in connection with quite a few villages looking to implement 20mph limits.

“In the article the police’s comment was, ‘We enforce speed limits but we consider the 20mph limit is a matter of driver conscience’. In other words, ‘We don’t want to know’.”

He would like police to visit Memorial Avenue with a speed camera periodically to encourage drivers to stick to the limit.

Mr Neal said: “It would be interesting to know what we have to do to get the police up here.” A Thames Valley Police spokesman said: “We operate an evidence-and risk-based assessment of all potential enforcement sites.

“If there is evidence of speed and a risk to road users then camera enforcement will be considered as a potential solution.

“There is a number of considerations and checks made before deploying cameras.

These include evidence of excessive speed from speed survey data, collision and casualty data, potential risk to road users, analysis of traffic data, site assessment for suitability of mobile enforcement, including van placement, and operational requirements.