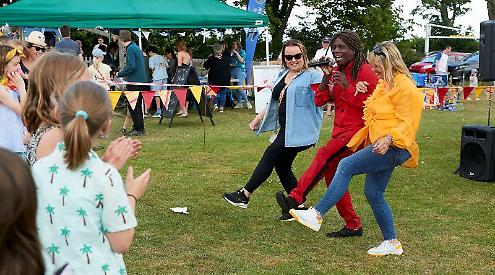 A WOMAN who has raised tens of thousands of pounds for Shiplake Primary School is retiring from its parent, teacher and friends association after 17 years.

Belinda Douglas, 52, stepped down following the Totally Tropical Summer Fayre, which took place on memorial field in the village.

More than 400 people attended the annual event, which was last held in 2019 and had not taken place since then due to the coronavirus pandemic.

Brewster, who led the group, lined up the children and their parents in the performance arena and showed them some dance actions to perform with the songs.

Danielle Yglesia, from Shiplake, gave a performance of flamenco, where she demonstrated three dances in a 10-minute slot. A dog show attracted dozens of entries across five categories, including prettiest bitch, “musical sits” and the dog “most likely to be taken home by the vet” — a role played by Erik D’Arcy-Donnelly, of Henley Vets.

There were also children’s relay races, crafts and bric-a-brac stalls and games as well as face-painting, a bottle tombola, a display of classic cars and a raffle with a £250 top prize. For refreshments there was a Tiki bar, barbecue and a tea and cake tent.

Mrs Douglas, who lives in Binfield Heath, and organised the fayre with Sally Howland, said: “Having the big steel band for a couple of hours made it feel like a mini-Glastonbury with everyone getting involved with the actions, including limbo dancing, to go with the songs. Hearing a steel band creates such a great atmosphere.

“The dog show was also a great success with 15 to 20 dogs in each of the five categories. The number of people who came shows how desperate everyone was for the fayre to come back as the last one was back in 2019 and it was a great success.”

Mrs Douglas is married to Darren, a painter and decorator, and they both attended Shiplake Primary School, as did their children Harri, 22, Charlie, 20 and Ava, 11.

She joined the school association because she loved her time there and it allowed her to support her own children.

Mrs Douglas helped organise about five fundraising events a year, including fairs in the summer and at Christmas, as well as quizzes, a bingo night and a barbecue with live music.

Each year she has brought in about £20,000, which the primary school then spent on equipment.

Mrs Douglas said: “Someone tried adding up all the money we have raised as a group over the years and it is a huge amount and I’ve loved to be able to raise money for the school, which remains close to my heart.

“We have had new playgrounds put in as well as all the resources such as white boards and iPads and, even before that, we paid for computers.

“But now my last child is leaving the school it seemed the right time to retire but I’m leaving the parent, teachers and friends association in the hands of a group of good people who are going to keep it up.”

Mrs Yglesia, who lives with her husband and their two children Thomas, nine, and Ella, seven, who attened Sonning Common Primary School, said she saw plenty of budding dancers in the audience.

She had unfurled a mat to which she had attached three pieces of plywood to dance on so that when she stamped her feet in the Spanish dance style, it could be heard to great effect.

She said: “Essentially, my little performance allowed people to see what flamenco is all about. It is not something that is particularly well-known and I performed three dances to introduce it.

“I trained with the Spanish Dance Society and I am hoping to launch myself in the Henley area and hopefully go into schools doing workshops. People were really engaged by it because it is something different to what you see usually.

“There was a one boy who was particularly into it and I told his mum I would keep in touch.”