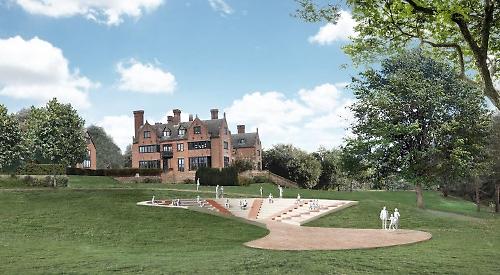 AN amphitheatre could be built in the grounds of Shiplake College.

It would seat more than 330 people and be used for plays, outdoor teaching and as a performance space.

The school would also make it available to community groups from outside the school.

The proposed site is a sloping grass bank that is currently an apple orchard in the original gardens of Skipwith House.

Eighteen apple trees that are at the end of their useful life would be removed but 18 replacement trees would be planted nearby.

A design and access statement by Henley architects Nichols Brown Webber says: “The school does not have a performing arts centre but uses a small tithe barn for school plays but this only seats 80 to 90 people. There is a small lecture theatre in the recently completed library/resource centre which seats 140 people but this is for indoor music recitals and lectures.

“Apart from the main dining hall, there are no other large spaces for performances which the school desperately needs.

“The majority of the time the amphitheatre would remain as a landscape feature and only during occasional school plays would a set be constructed on the stage. The river would be mainly the backdrop with some minimal scenery.

“The theatre is set so as to make use of the dramatic river setting but when viewed from the original main house to appear as an eccentric folly in a large garden.

“The amphitheatre would seat approximately 336 people. Control desks for sound and lighting would have to be mobile-type units with temporary weatherproof covers.”

Headmaster Gregg Davies said: “I am particularly excited about this project as it draws together many different themes that I feel strongly about.

“In addition to tidying up and enhancing the landscape around the beautiful Skipwith House, we will be making the most of our stunning location overlooking the river.

“The theatre will be dug into the land so will not impact on any views of the college from the river.

“Both the heritage and conservation studies concluded that the development was entirely in keeping with the existing buildings and would enrich the environment.

“The performance space will be available to a variety of groups from the wider community, including local schools and theatre and music clubs. Having somewhere for larger numbers of our pupils to gather will be hugely welcomed and of course many subject departments will benefit greatly from this outdoor learning space, not just the drama and music departments.

“The amphitheatre project will not be covered by fee income but entirely funded by donations and other sources.

“When it is completed will therefore depend on when the funds are available but fortunately it will be a relatively quick completion once work can begin.”

Jenny Nunes, head of drama at the college, said: “It will give the kids the opportunity to perform in a completely different environment, a much bigger space.

“I think when people come to look around the school it will be a big selling point.

“We hope it will bring in the community — the community choir, local primary schools and local am-dram companies might want to come and do productions there.”

The college has also applied to build a new boathouse in a former quarry by the river.