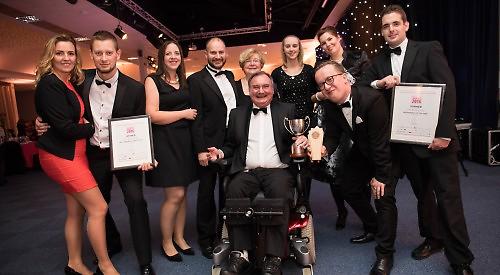 A PUB in Shiplake has been named Oxfordshire restaurant of the year.

The Baskerville received the prize at a ceremony at the King’s Centre in Osney Mead on Tuesday attended by more than 250 guests.

The pub also won the best gastro pub/brasserie category while the chefs from Orwells restaurant in Shiplake Row took the chef of the year title.

The judges, who were chaired by Alain Desenclos, maître d’ at Le Manoir Quat’Saisons, said they were impressed by the Baskerville’s pride in its food.

Kevin Hannah, who owns the pub, said: “I nearly fell off my seat when it was announced we had won.

“I thought we might be in with a chance to win our category but not to win the top award.

“It’s down to 13 years of hard work with my dad and us as a family, my incredible staff, every single person who has worked with us and a lot of hours.”

Ryan Simpson and Liam Trotman of Orwells received their prize only weeks after the restaurant won four AA Rosettes and was named restaurant of the year in the Waitrose Good Food Guide 2017.

Mr Simpson said: “We’ve had an amazing last few months. It’s great to be recognised nationally but we never forget the importance the locals have on our business.

“They are our regulars and our most important customers and winning this award shows that we are doing something right. We aim to keep it that way.

“Thanks to everyone who has supported us since we opened six years ago.”

The pair opened Orwells in 2010 having gained a Michelin star while working together at The Goose in Britwell Salome.