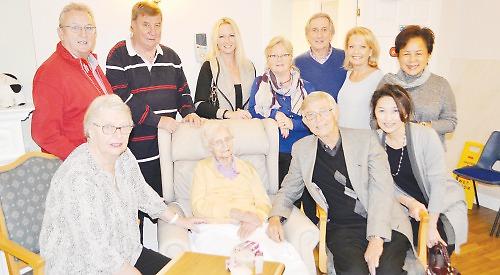 A WOMAN living at the Lashbrook House care home in Shiplake has celebrated her 100th birthday, writes James Burton.

Doris Pert, who moved to the home from a sheltered housing complex in Windsor earlier this year, was visited by several dozen relatives, including her son John, who flew over from France, and daughter Joan, who visited from Switzerland.

The grandmother-of-three, née Rickett, was born in Southall and for most of her life lived in Middlesex.

She had an identical twin named Violet and was nicknamed “Blue” as her mother used to dress her in the colour to distinguish her from her sister.

She married her husband Jack Pert, an Army colour sergeant, during the Second World War and lived her adult life as a housewife and mother to their two children. She was widowed in 2002.

On Saturday her family enjoyed cake and refreshments at Lashbrook House provided by the home’s owner Majesticare and then had a private celebration at the St George and Dragon pub in Wargrave.

Mrs Pert’s son said: “We’ve all really enjoyed ourselves and it’s great to get together for the first time in years. Mum is the matriarch of the family so it’s a proud moment.”