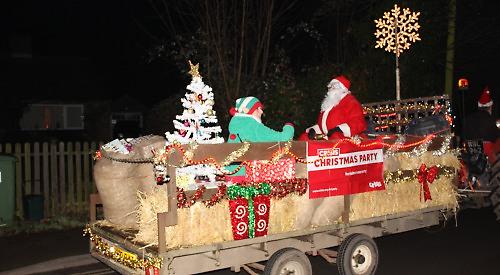 A TOTAL of £715.88 was raised by a village tractor run featuring Father Christmas.

He arrived in Sonning Common on a specially decorated tractor and trailer driven by Paul Jenkins and accompanied by Karen Lowe dressed as an elf. A PA system, which was donated by Martyn Cooper, played music as the “sleigh” made a two-hour tour of the village.

Father Christmas rang a bell as he went by to enourage parents and their children to come out and greet him. Sweets and stickers were handed out while people walked alongside with collection buckets.

The proceeds will be shared by Sonning Common Primary School and homelessness charity Crisis.

Helen Coyne, one of the organisers, said: “The volunteers were brilliant and made the atmosphere. We had hordes of people following Santa.”

After the run the volunteers went to the Unicorn pub in Kingwood Common for a drink and had another collection.