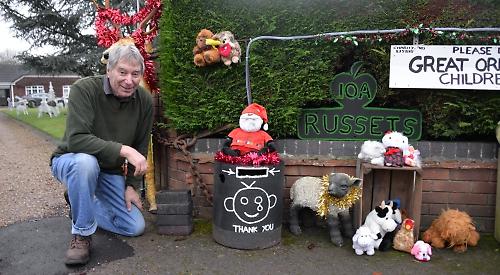 A COUPLE have been raising money for charity with a massive Christmas lights display.

Hundreds of people have visited John and Carole Lambourne’s home in Kennylands Road, Sonning Common, to admire the seasonal spectacle and make a donation.

The couple have been raising money for Great Ormond Street Hospital in London, as they have done for the previous three years when they raised a total of £4,200.

Mr Lambourne, 77, said they supported the hospital because it cares for children.

“For me Christmas is about kids,” he said. “There are lots of charities we could do it for but this one is so worthwhile. At other times of year I do charity events for Sue Ryder and the Thames Valley Air Ambulance.

“The kids of the village really like it. We look out of the window and see them all standing out the front.”

It was four years ago that Mr Lambourne, an agricultural engineer, decided to add to his small collection of festive lights, mainly of Christmas trees and reindeers, outside their bungalow.

Mrs Lambourne, 73, then suggested they took the opportunity support a charity.

Mr Lambourne said: “We then found out people in the village had family members who had experience of Great Ormond Street. The first year we managed to raise £800, then £1,400 in the second year and last year we managed £2,000.”

Mrs Lambourne, a retired carer, said they enjoyed handing over the money at the hospital.

“We go up to see them and the nurses take us round,” she said. “When you talk to the children there it makes you realise what it’s for.”

Mr Lambourne adds to his collection of lights each year so that the display now includes lanterns reindeer, Christmas trees, penguins, stars, a Santa’s sleigh on a 12ft pole, a star on top of the garage and a homemade owl decoration which hangs from a tree.

He said: “It takes a good week to get them all out. I look at the garden and try to be artistic with the big pieces at the back and the smaller ones near the front. My background as an agricultural engineer means I’ve been able to make a metal framework for some of my own pieces then add rope lights to them.”

In the street outside the bungalow he has a collection of Christmas toys, a steel donation box and a sign saying what the money is for.

Part of the display is built into his hedge and shows Santa going “down the chimney”.

Mr Lambourne said: “I went to the Tree Barn in Christmas Common and saw a little Santa with his legs in the air going down a chimney and that’s where I got the idea from. The first year it was just the legs in the hedge, then I added the chimney and now he has skis on his feet.”

The couple, who have been married for 50 years, are known in the village for their front garden displays. These have included a pram for the births of Prince George and Princess Charlotte and a giant watering can that was outside for the most of the summer.

They held an official switch-on for their Christmas display attended by family, friends and neighbours.

Each night the lights go on at about 5pm and are switched off at about 10pm.

Mr Lambourne said: “Before Christmas people say, ‘when are your lights going up?’. Now word has got about. A lady from Kidmore End came to see us last year and she said her children make her wait on the way home from school until we turn them on so they can go past.

“I always put a sign up in the New Year to say thanks to everyone for their donations and so people know how much we’ve raised.”