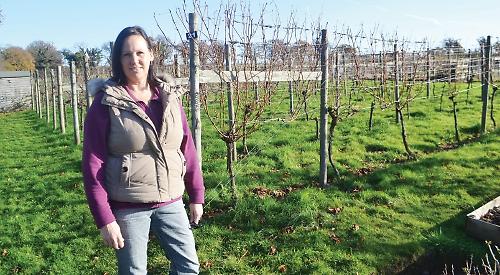 A VINEYARD at the Sonning Common Parish Council allotments needs a new tenant.

The 80 vines have beeen a feature of the allotments in Gallowstree Common since the Seventies.

Della Hamblin, from South Stoke, has looked after them since 2011 and uses the grapes to make wine. The most recent harvest produced about 27 litres of wine.

Some of the vines, which are across two full plots, are dead and need replacing.

Mrs Hamblin, who also has vines at an allotment in Chalkhouse Green, said it would be a shame if the vineyard didn’t continue.

She said: “I would hope someone could keep it going. I would be happy to pass on my knowledge or answer any questions about pruning.”

Mrs Hamblin, 54, took on both vineyards when she finished a wine study course at Plumpton College in East Sussex, which included growing vines.

She used the established vines at the allotments to practice her skills and the vines in Chalkhouse Green to see if she could start from scratch too.

Mrs Hamblin said: “It takes about three years for the vines to be established. Now they are producing, which is one of the reasons I can’t look after the council ones because it takes up too much of my time.”

She added: “It’s fun to grow your own wine and you can experiment as well — I do sparkling wine, which takes three years rather than one year to produce but I think it’s nicer.”

Mrs Hamblin said the grapes were a mix of German varieties which produce a dry wine.

For more information about taking on the council vineyard or filling any of the other plots, call parish clerk Philip Collings on 0118 972 3616 or send an email to clerk@sonningcommon
parishcouncil.org.uk