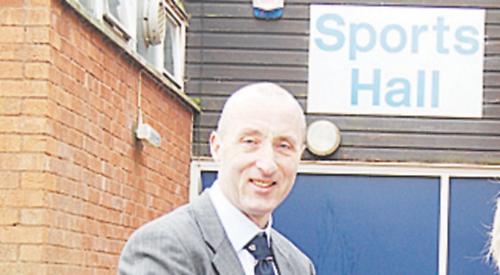 THE headteacher of Chiltern Edge School in Sonning Common says selling some its land will help improve the sports facilities.

Daniel Sadler wants to have an artificial pitch and a studio space for fitness sessions and to refurbish the school sports hall.

A section of the playing fields is earmarked for 37 new homes in the Sonning Common neighbourhood plan, which was passed in a referendum in September.

The Education Funding Agency approved the sale of the land in March last year on the condition that the sports facilities are improved.

Mr Sadler said: “We needed to show the improvements to facilities, for the children and the community, and we feel our plans are realistic.

“We are looking to use the school to support the local community.”

He said it was hoped to obtain planning permission in the middle of this year and then sell the 2.4 hectares of land to a developer.

“We are going to be investing heavily in sports facilities, such as a full-size Astroturf which could be rented out in the evenings and at weekends. There will be refurbishment of the sports hall and more studio space for fitness.”

Mr Sadler, who has been headteacher since 2009, is also part of a working group, run by Sonning Common Parish Council, to provide sports facilities on land that is currently part of Bishopswood Farm.

The land is being given to the parish council as part of plans for a development of 50 homes on a neighbouring field by Linden Homes and landowner Patricia Pelly.

Mr Sadler said the two facilities wouldn’t be in competition for lettings as the Bishopwood Farm land would be used by families during the day and in the evenings while at weekends there would be sports fixtures at the school that enabled people who worked during the day to take part.

“It sorts all kinds of needs for the community by the two being complementary,” he said.

“We will be working in partnership with the parish council to improve sporting and leisure developments in the area in line with what is going on over the road.”

Mr Sadler said the school would work with the developer in the hope of providing housing for his teachers on the development.

“This is because it is especially hard for teachers in this area, especially young teachers,” he said. “We are hoping to take some of the accommodation to help attract teachers and retain them. When we have newly qualified teachers, this would be a big incentive.”

The school will also use money from the land sale to help reduce its energy costs.

“It will be to future-proof the school with such things as solar panels as we try to become more carbon neutral,” said Mr Sadler.

“It’s not required by the Department for Education but it’s good for the education of the children and it will help with energy costs.”

Mr Sadler added: “The development is exciting for the school. We know that a lot of families out there can’t get suitable housing so it’s good that there will be more houses for families.

“Once we sell the land there will be money to improve facilities and that’s very positive from our point of view.

“It will change the character of the area with more housing but overall it will be a good thing for the
community.”

The Sonning Common neighbourhood plan names sites for 193 homes to be built by 2027 in order to meet government targets. It was backed by 94 per cent of voters in September’s referendum.

South Oxfordshire District Council, the planning authority, adopted the plan in October and must take it into account when considering applications.