Volunteers plant tree to help save rare colony of butterfly 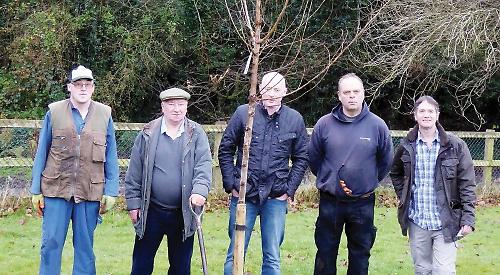 AN elm tree has been planted in the grounds of a Sonning Common pub to help conserve a rare species of butterfly.

A kaleidoscope, or group, of white-letter hairstreak butterflies currently lives in a wych elm tree near Widmore Pond.

Peter Cuss, a member of the Upper Thames branch of Butterfly Conservation, spotted the colony and asked the parish council, which is responsible for the pond, to plant another elm as a reserve home for the insects in case their current home should die.

Now a sapporo autumn gold elm tree has been planted in the grounds of the Butcher’s Arms, off Blounts Court Road, in case the butterflies need to migrate.

Councillor Stan Rust, who oversees tree planting in the village, said: “This butterfly was featured in a Countryfile programme recently as an endangered species.

“It relies on mature elm trees, the sole food plant for its caterpillars, so when Dutch elm disease struck the UK in the Seventies, it was in danger of extinction. It has managed to hang on but its population has dropped by an estimated 96 per cent since then.

“To help conserve it, whenever a tree with a colony is discovered, if possible a disease-resistant elm is planted nearby to act as a reserve home should the host tree die.”

As there was no space around the pond, parish councillor Dirk Jones asked Rob Blues, landlord of the Brakspear pub, which is opposite, if he would have a tree planted there.

Mr Blues said: “I checked it with Brakspear and they were more than happy with it.”

Before the tree was planted it had to be checked and approved by the Department for Environment, Food and Rural Affairs. It was one of 13 trees to be planted around Sonning Common last month as part of the council’s plans for 100 new trees in the village over the next few years.

The trees have been paid for with a donation from developer James Stone, of Lambourne Road, in return for being granted planning permission to redevelop the site of a derelict former commercial building in Grove Road.

Cllr Rust said: “He wanted to take down the big trees on his site and replace them but we decided we did not need huge trees.

“This is the first phase and there is still lots of money left so we will keep putting in trees until the money runs out.”

Two laurel bushes have been planted in Kennylands Road to help screen houses in Gardeners Copse.

Cllr Rust said: “This is so that the first view of the village from the B481 is one of green trees and bushes rather than brown brick and white plastic.”

A photinia red robin and elaeagnus gilt edge have been planted in the play area in Lea Road. Cllr Rust said: “This helps to break up the long line of fencing and add colour to the area.”

Five apple trees were planted by Councillor Tom Fort at the Churchill Crescent play area. There are two tydemans late orange, two reine d’orleans and one peasgood nonsuch, which are all old English varieties he has grown himself.

The trees should produce fruit after several years.

Cllr Fort said: “I thought it would be good for Sonning Common children to be able to play in the shade of old English apple trees and when they mature to be able to pick and enjoy the fruit.

“I like to think of the children of the future enjoying this village asset long after I'm gone!”

A dead amanogawa cherry tree outside the Heath & Watkins hardware shop in Wood Lane has been replaced.

All the trees were planted by Brian Willis, of Woodlands Road, and his son Martin, assisted by James Sadler, of Grove Road. Mr Willis will water and monitor the saplings until they are well established.

All the trees were bought at Mulberry Plants in Hare Hatch.

Six cherry trees had already been planted at Chiltern Edge School with the help of the Village Gardeners.

Cllr Rust said: “The beauty of this project is the variety of the proposed uses we have for the trees.

“We have used them for screen, for conservation and for education, like the Churchill Crescent play area.”