Man wins his own funeral 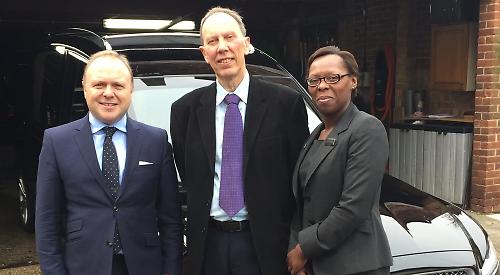 A MAN suffering from terminal cancer has won his own funeral in a competition.

Ken Stevens’s prize is a pre-paid ceremony worth about £3,000 offered by undertaker A B Walker, which has offices in Henley and Caversham.

He entered the competition at an advance care planning workshop organised by Sonning Common Health Centre.

The event aimed to encourage people to think about various aspects of old age, such as funerals, wills and granting power of attorney.

Mr Stevens, 71, of Red House Drive, Sonning Common, wants to be cremated at Reading Crematorium and his ashes to be scattered in Shetland, where he used to live, or on Hampstead Heath, where he proposed to his wife Sheila in the Sixties.

He said: “They didn’t specify a price limit but I think if I’d asked for a procession of horses with black plumed feathers I might have been pushing the spirit of it!

“I’d been putting some money aside for the funeral because I didn’t want Sheila to be burdened but this has really taken a lot of pressure off.

“I was quite shocked to be told I’d won because it’s a bit like those competitions on cereal boxes — you go in for them but you never expect anything to come of it.

“Our family has always taken a pragmatic view of these things so, for us, a funeral is largely an administrative disposal.

“I’ve written my eulogy to make things easier and proposed a few hymns and readings but they’re only suggestions and I’m very happy for my family to decide what they would like.” Mr Stevens was diagnosed with prostate cancer in May 2015 after struggling with pain and tiredness after going on country walks.

By the time it was confirmed, the disease had already spread to his lymph nodes and bones while the original tumour had become too large for surgery.

Now Mr Stevens has hormone injections at the Royal Berkshire Hospital in Reading every three months to reduce his testosterone levels, which slows down the tumour’s growth.

He is also taking an experimental chemotherapy drug known as STAMPEDE, which keeps the cancer throughout the rest of his body at bay.

The treatment is working as his blood levels of prostate-specific antigen, a marker of the disease, has dropped from 1,650 nanograms per millilitre to below 30. A healthy figure is below four.

However, although he can continue taking it indefinitely, he has been warned that it will eventually stop working and his condition will then progress towards the inevitable. Mr Stevens said: “I’d been having the usual ‘old man’ problems with getting up lots in the night and was tiring easily.

“The surgery did a precautionary blood test but didn’t seem too concerned. However, they called back asking to see me urgently because they were 99 per cent certain it was cancer. I then had a biopsy which confirmed it.

“The hormone treatment blocks testosterone, which has some interesting side effects like reducing your body hair and shrinking your wedding tackle, but apart from that it’s not too bad.

“I can’t walk or drive long distances but I can still get about, which is good, although it means I feel like a bit of a fraud when I tell people that I have cancer.”

Mr Stevens, who lives with his wife and adult daughter Astrid, grew up in London and spent most of his life as an administrative manager for various companies including the Civil Aviation Authority at Heathrow Airport.

He was married in 1969 and, after moving around the country, he and his wife lived in Tilehurst until they moved to Sonning Common in 1985. He retired at 60 and then worked part-time for Henley boat hire firm IPG over several summers.

Mr Stevens said winning his funeral had given him more time to focus on his family and hobbies, which include attending art classes at St Michael’s Church hall in Sonning Common.

He said: “I have no idea how long these drugs will last but I’m just enjoying each day as it comes.

“I don’t have a ‘bucket list’ as I can’t think of anything I particularly want to do. I have no burning desire to scale the pyramids of Egypt or climb Everest.

“The people at A B Walker were very helpful and professional when they interviewed me.

“They instinctively know whether they need to be solemn or, as in my case, they’re free to be a bit more jovial. I was chuckling all the way through my appointment as I still couldn’t believe I’d won.”

Mrs Stevens said: “To begin with, it felt a bit unreal when we found out he’d won. All my married life Ken has worked very hard to smooth my way and this is just another example of that.

“It was unexpected and obviously a prize I don’t want to ‘cash in’ any time soon but it’s good that he knows his family won’t be left struggling after he has gone.”

Julian Walker, director of A B Walker, said: ‘Death is something that no one wants to think about and that’s natural but for many people planning their funeral has brought peace of mind.

“It also allows you to save money by purchasing a funeral at today’s prices rather than what they may be in the future.

“Planning ahead can help to ease the financial and emotional burden on loved ones at a distressing time.”