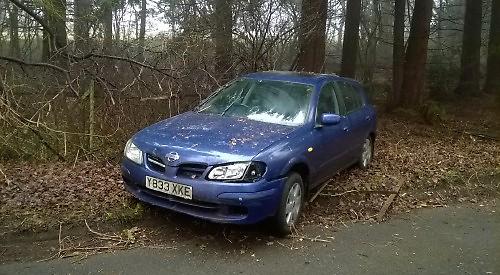 A WOMAN has told of her fear after crashing her car on an icy road that hadn’t been gritted.

Joanna Atkinson skidded down a hill for about 200 metres and then slewed across the road before colliding with a fence.

She and her teenage daughter, whom she was taking to school, were both injured in the accident, which was one of five on the same stretch of road within about 90 minutes of each other. It happened at about 8.30am on Wednesday morning last week on Devil’s Hill, a rural road between Henley and Sonning Common, which is busy on weekday mornings with people driving to work and parents on the school run.

Mrs Atkinson, 48, of Pages Orchard, Sonning Common, was taking her 13-year-old daughter Angel to Gillotts School in Henley when he she lost control of the borrowed Nissan Almera.

She said: “I came round the first bend slowly, as I do. As I came round, the car just drifted sideways.

“I didn’t brake because that’s the worst thing to do. I was only going 20mph or 25mph because it was foggy and wet.

“I was holding my arm over my daughter, saying ‘hold on, hold on, hold on!’ and she was covering her face. She thought the car was going to flip over.

“If we had gone any further we would have smacked into a big tree.”

The car, which she had borrowed from a friend, suffered damage to its lights, bumper and bonnet and was scratched down one side.

Mrs Atkinson called the police and was told officers were already on the scene because of three earlier accidents nearby with more officers on their way because of another one.

She was talking to an officer who arrived at the scene of her crash when she witnessed a woman driving Peugeot skidding and go into a spin.

“She just missed the policewoman,” said Mrs Atkinson. “They then closed a section of the road. The police lady gave us a lift back home.

“I was quite disappointed they hadn’t done something to stop any more traffic coming down the road after the first accident.”

Mrs Atkinson, a cleaner, and Angel both suffered whiplash and she had to take a week off work to recover.

She complained in writing to Oxfordshire County Council, the highways authority, saying the road should have been gritted.

She wrote: “I am disgusted that nothing was done prior to or after the accidents and even the next day fellow commuters said the road was open again despite still suffering black ice and gritting not having been done.”

Mrs Atkinson, who went back to work Tuesday despite still suffering back pain when she moves, said: “The road wasn’t gritted at all.

“There was no warning sign. Apparently now they have a sign up saying ‘ice’ on that corner but that’s it.

“It should be on the gritting network because it is a busy road used by a lot of people. A lot of people do that route to Gillotts.”

A council spokesman said: “This road is not on our network for gritting. In common with most councils in England, we grit all A roads, all B roads and some C roads.

“One daily gritting run in Oxfordshire covers 1,200 miles of road, the equivalent distance of London to Iceland. We send the gritters out when the temperature is forecast to fall below 0C.

“They have been out across the county on around 30 occasions this year, including three times in the space of 12 hours when snow fell in Oxfordshire earlier in January.

David Nimmo Smith, the council’s cabinet member for highways and a Henley town and district councillor, said: “We grit and salt about 40 per cent of the roads in the county, which is better than surrounding counties to be honest.

He said the winter maintenance programme was reviewed every year according to what funding was available and some routes would be amended if it was deemed “appropriate”.

Councillor Nimmo Smith added: “If there are roads that are not on our gritting round but may have an accident history, there’s a facility for parishes to put in salt bins on the hills.”