Hundreds of patients bid farewell to GP at coffee morning 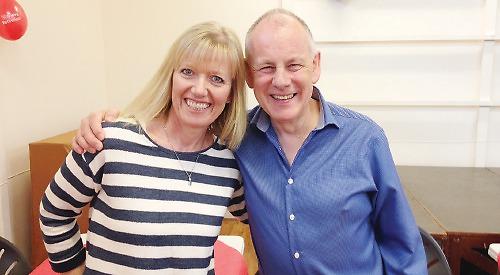 A COFFEE morning for people to say farewell to the senior partner at Sonning Common health centre raised more than £500 for charity.

Dr Andrew Burnett, 57, retired from his post on March 31 after 32 years at the surgery in Wood Lane.

He organised the event at the village hall on Saturday to say goodbye to patients and raise money for Sue Ryder Nettlebed.

Hundreds of people dropped by during the morning.

Dr Burnett, who lives in Peppard, said: “There were a lot of old friends. There were some I have known for a long time as patients who came to say goodbye.

“I’m clearly very sad to say goodbye to so many patients who I have known for such a long time but on the other hand I am very excited about being retired and having family things to do.”

During the morning Peter Woolsey, a member of the health centre’s patient participation group, presented Dr Burnett, a keen cyclist, with a £200 voucher for AW Cycles in Caversham.

The money for this was collected from patient participation groups in south-east Oxfordshire to recognise Dr Burnett’s work as the lead doctor for the area’s locality forum, which is part of the Oxfordshire Clinical Commissioning Group.

Mr Woolsey, from Binfield Heath, said: “All the members of the locality forum wanted to contribute towards his gift.

“Andrew’s achievements with this critical committee have been remarkable.

“He was always able to understand their unhappiness and disagreements and tried to improve the standards of health in all the practices.”

Dr Burnett started the health centre’s cycle club, where up to 40 people meet up to ride up to 20 miles, starting and finishing at the centre.

Some cake left over from the coffee morning was donated to On Your Bike, which took place the next day and also raised money for the charity.

Dr Burnett’s patients will be split between Dr Claire Webster, a long-term locum at the practice who will go full-time, and Dr Nick Smith, who was a registrar in 2013 and is returning.

Dr Samuel Muncey, who is currently a registrar at the practice, will be given a permanent position when he finishes his training in August.

The senior partner will be Dr Kim Emmerson, who is now the practice’s longest-serving doctor.