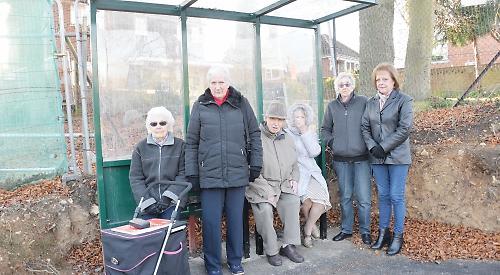 RESIDENTS are angry that a bus shelter in Sonning Common has been replaced with a smaller one that provides less protection against the elements.

The shelter in Wood Lane has been moved about 5m to make room for an access to a new housing development at Brinds Copse.

But residents say it has no sides and a roof that’s too small to protect passengers from the wind and rain.

Bernice Ellis, of Brinds Close, said: “When it rains people stand here with brollies because you can’t stay dry as the roof is too small.

“We knew the old bus stop would have to be moved to create the access road for the building work but thought there was going to be a like-for-like replacement.”

Dozens of people use the stop each day to catch the 25 bus into Reading to go shopping or visit the Royal Berkshire Hospital. It is also used for the Reading Football Club matchday service.

The new shelter was first installed in August but was too close to the road so a few weeks later it was removed and then made taller and placed further away from the road. A single seat was also added at residents’ request and another seat has since been added.

Mrs Ellis said the older shelter had sides and seating for at least six people.

She called on the parish council, which sold the land for the development, to provide a shelter that could fit more people underneath and provide better protection from the elements, like the larger one at the opposite end of Wood Lane, near the junction with Kennylands Road.

Mrs Ellis said: “People have been on at the parish council to get this sorted because it’s a health hazard. The council had money from the sale of the land and it needs to talk to local people about this. There has been no thought for them. It’s unacceptable.”

She said she had been told by the council that the shelter would be replaced once the development was finished but she wanted it done now.

“It needs to be bigger with a better roof and proper sides and seating from one side to the other with no gaps,” said Mrs Ellis.

Chris Harding, of Wood Lane, said he also thought the shelter would be replaced like for like. “If I send a suit to the dry cleaners I would not expect it to come back without pockets and lapels,” he said.

“This stop isn’t just used by the elderly, its used by young people and mums with babies in prams. It’s used very well at weekends as well.”

The council made about £500,000 from the sale of the 0.18-hectare site where two houses are now being built by Greenfield Engineering Group, of Maidenhead.

All the receipts from the sale have been earmarked for village improvements, including £300,000 at the recreation ground off Reades Lane, £100,000 for the village centre and £100,000 for other projects.

At a meeting last week, the council agreed to investigate installing a better bus shelter, which could cost up to £6,000.

Chairwoman Carole Lewis said: “We need to see what can be done in the restricted space. We will get some quotes.”

Councillor Tom Fort said: “We derived a considerable sum of money from the sale and as a result of obtaining the money and the houses being built the bus shelter is now less adequate then before. We have to rectify the situation.”

Councillor Barrie Greenwood said: “I am confident a solution will be arrived at.”