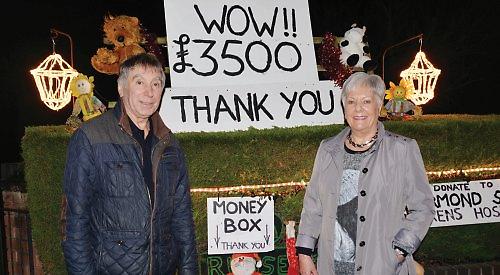 A COUPLE from Sonning Common raised £3,500 with a Christmas lights display.

John and Carole Lambourne had many different types of illuminations in the garden of their bungalow in Kennylands Road.

A star was placed at the top of a tree, which could be seen from Grove Road and Crowsley Way at night.

Each night the lights went on at about 5pm and were switched off at about 10pm.

Neighbours, passers-by and visitors could place donations in a locked metal box with a miniature Father Christmas on top throughout December.

The couple were raising money for Great Ormond Street Hospital for children in London. This year’s total was the highest since they started collecting at Christmas in 2013. On one night alone they raised £221.

They have now collected £10,200 for the hospital in five years. The couple put out a special notice saying how much had been raised tand thanking people.

Mr Lambourne, 78, said: “It’s unbelievable how generous people have been when there are so many charities and good causes out there.

“I guess people now know the display is going to be here and they come to see it. Friends tell each other about the lights they are going to see.

“The only night we couldn’t put the lights on was when it snowed.”

Mr Lambourne, an agricultural engineer, adds something new to the display each year to keep people interested in coming to see it.

He said: “We will now work on something for next year.”

Mrs Lambourne, 74, a retired carer, said: “A lot of people know John because he was born and bred in the village but everyone is grateful to him because he works so hard on it.”