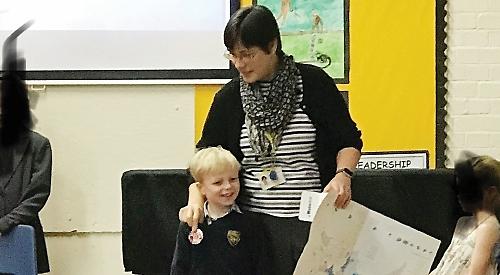 THIS little superhero is William Bryant. For his fifth birthday he asked not for presents but for cash donations to enable deprived children to drink clean water.

William, a pupil at Rupert House School in Henley, came up with his idea after being captivated by a television advert for WaterAid.

The charity campaigns and fund-raises to provide the world’s poorest and most marginalised people with clean water to drink and decent toilets or hygiene.

William couldn’t understand why some children have access to clean water while others don’t.

His mother Sarah said: “It was really random. We had the television on in the background and a Water Aid advert was on and he was staring at it. He was glued to the TV.

“I thought that I wouldn’t say anything until he asked and then he said, ‘Mum, I don’t understand — why don’t they have good clean water to drink?’

“I told him that not everybody does have clean water and we are really lucky where we are. He couldn’t get his head around it.

“When you are that little you assume that everybody is okay but it is up to us to teach them that the world isn’t that straightforward.” The family then had a discussion about the issue in their kitchen where some of William’s toys are kept.

Then, to Mrs Bryant’s surprise, he declared that he already had enough toys so didn’t want any more for his birthday on January 17 and instead wanted to use the occasions to help others,

True to his word, William held a superhero-themed birthday party for his class of about 20 children at Peppard war memorial hall. His mother said: “I was worried that he might have a little meltdown at the party because there would be no presents but he was so excited that he didn’t even notice.

“Everybody came up to him and said well done and that they would do the same thing for their birthdays.”

William, who lives in Carling Road, Sonning Common, with his mother, father Matthew, a recruitment agency owner, sister Bella, eight, and brother Theodore, 11 months, also spoke at a school assembly about how WaterAid helps communities around the world and the difference that donations can make.

Mrs Bryant said: “The thing that I have found overwhelming is the reaction of his peers.

“They have all been so encouraging and so many children have been talking about it at home, so we have really raised awareness.

“William also asked why the children in the advert looked so thin, so I explained about poor nutrition and lack of food, to which he responded, ‘we can save towards food at my next birthday’.”