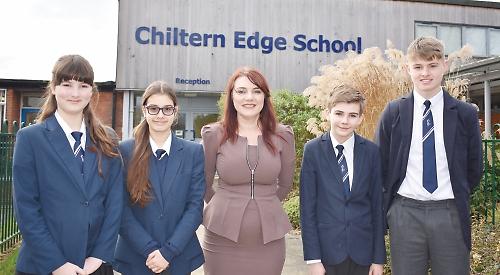 CHILTERN Edge School in Sonning Common is to become an academy as it tries to come out of special measures.

The secondary school in Reades Lane is to join the Maiden Erlegh Trust, which runs three schools in Reading and Bracknell.

The move has been approved by the regional schools commissioner and will officially take place on August 1, just weeks before the start of the next academic year.

The idea was originally suggested by former Reading East MP Rob Wilson after the school was put into special measures when it was given an “inadequate” rating by Ofsted in April last year.

Oxfordshire County Council, the education authority, considered closing the school but lifted this threat in December following immediate improvements made under new headteacher Moira Green, who was appointed on an interim basis in June and permamently in December. A monitoring report carried out by Ofsted in November said the school was improving and on track to move out of special measures.

Miss Green said: “We are looking forward to a successful future as part of the Maiden Erlegh Trust. The opportunities for collaboration and development will strengthen our ability to provide the very best educational experience for the children.

“Maiden Erlegh is synonymous with high standards and great progress for students. That is what we aspire to for our students.

“We hope that by working with the trust we will get back to ‘good’ really quickly.”

The new partnership was announced on Thursday last week after talks involving the school, the county council and Reading Borough Council as many of the pupils come from Caversham and Emmer Green.

Mary Davies, executive headteacher of the trust, said: “I am delighted that Chiltern Edge is joining the Maiden Erlegh community as it represents a body of professional colleagues and bright and articulate students who will enrich the trust and who have already shown great determination to improve.”

In a letter to parents, she said: “We have a proven track record of supporting school improvement in other establishments and providing excellent teacher training across all phases.

“Maiden Erlegh School in Earley consistently performs above the national average in examinations. Alongside our academic successes, we pride ourselves in developing the whole child.

“When they leave us we want our students to be confident, well-rounded and prepared for the next phase of their lives.

“We are a small trust because we will only partner schools we believe in and only when we feel able to support them effectively.

“Maiden Erlegh Trust is committed to building on the strengths of Chiltern Edge and working with Miss Green and the whole staff body, the governors and yourselves to develop the school further so that it provides exceptional academic outcomes for your children.”

Gemma Levy, a parent who started the Save Our Edge campaign to keep the school open, said: “It a relief to have Chiltern Edge as a secure school again.

“The support for the school has been overwhelming and shows how important it is to so many.”