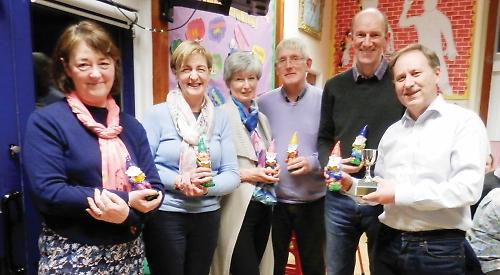 More than 50 people attended the event at the school in Grove Road on Friday with more than a dozen teams taking part.

The winners were Kelly’s Heroes, made up of Martin and Gail Kelly, Eric and Angela Davison and Maddie and Jonathan Sharman. They defeated Two Hoots on a tie-break question.

The team was presented with a trophy and each member received a prize of a small garden gnome, made by David and Mel White who compiled the quiz.

The proceeds will go towards new interactive whiteboards for the Grove Road school.

Mrs White said £760 was a “fabulous” sum to raise after the “hotly contested competition”.

She added: “Many, many thanks to everyone who took part and helped on the night. We hope to see all of you again next year.”