Women told to leave busy cafe ‘for staying too long’ 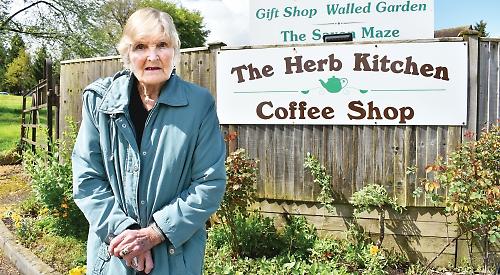 THREE women claim they were asked to leave a café because they had stayed too long without ordering a second drink.

Patricia Hughes, Jane Chaplin and Pat de Tisi had spent about 75 minutes sitting at a table chatting at the café at the Herb Farm in Peppard Road, Sonning Common, when they say a waitress brought over their bill and asked them to finish up.

She told them their table was needed by two mothers with children in pushchairs who couldn’t fit at a smaller table.

The women say that they will not be returning to the café, which they have been visiting for 15 years, as they felt humiliated.

The café’s owners have apologised, saying the café was busy and the women did not order a second drink so they were given their bill but only asked to pay when they were ready.

Mrs Hughes, a former chairwoman of Sonning Common Parish Council, said she and her friends typically visited at least once a week and often stayed for long periods without being challenged.

The incident happened on Tuesday, April 24 when she joined her friends for coffee and toasted teacakes at about 11.30am.

Mrs Hughes, 83, of Sheridan Avenue, Caversham, said: “We were chatting away and suddenly had this bill plonked down in front of us. We said it was unusual as we normally pay at the counter and the waitress said, ‘we need your table’. We said ‘pardon?’ and she repeated it.

“If they’d asked us to move so that the mothers could have our table that would have been fine but it seemed a bit drastic to ask us to leave. We asked why and the manager said, ‘well, you have been here since 11.30am’.

“It wasn’t the mothers’ fault as they made clear that they hadn’t asked for us to go. We would have moved and ordered another drink if they’d explained the situation.

“It’s a shame as we’ve been going there for years and have spent a lot of money with them.

“It has always been a very friendly place and we’ve always got on very well with the staff. None of us is of an age where we misbehave in public and none of us has ever been asked to leave a premises before. It was a very humiliating experience.”

Mrs Chaplin, 84, of Peppard Road, Sonning Common, said: “We were pretty upset as it all seemed so unnecessary. They only needed to ask if we’d mind moving.

“I don’t understand because it’s a lovely place but we won’t be returning.”

Mrs de Tisi, of Caversham, said: “It’s a very rude thing to do to customers and I’m not sure whether it’s due to a lack of training or manners.

“If there had been large numbers of people queuing up for a table it would have been different but other tables were free so I’m not sure what they were thinking.”

A café spokesman said staff had cleared the women’s cups and asked if they wanted more drinks. The women said no so they brought over a bill and asked them to pay it when ready.

They said the women paid then returned to the table and continued talking. They declined another offer of more drinks so were asked to move to a smaller table, at which point they left.

The spokesman said: “We are very sorry to hear of this negative experience.

“We take complaints very seriously and endeavour to learn from problems and to work with our staff to ensure that a similar situation does not arise again.

“We apologise for the inadvertent offence caused. After learning of this complaint, our staff were upset that their attempt to accommodate all our customers on a very busy day led to such a reaction.

“We would have been grateful if the customer had raised this grievance with a manager on the day.”