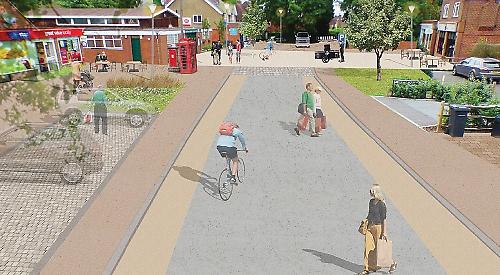 PLANS have been drawn up to transform parts of Sonning Common to make the village more pedestrian-friendly and ease traffic problems.

Street designer and traffic expert Ben Hamilton Baillie was paid £10,000 by the parish council to come up with ideas to improve the village.

He says there needs to be a change in the character of the roads to change how pedestrians and cars act.

Part of the village’s neighbourhood development plan, which passed a referendum in September 2016, set out plans to improve traffic.

In the plan it says the working group wished to create a culture of responsible highway use, maintain and enhance the village centre and reclaim the centre for dominance by cars.

Mr Hamilton Baillie said: “The most essential principle is to encourage and ensure that shoppers, pedestrians and cyclists are not scared by traffic, and to start to reverse the long-established imbalance in the priority granted, and deference shown, to cars.”

The redesign of the village centre is proposed from outside Occasions to the junction with Wood Lane.

There would be a square outside the village hall, which expands across the carriageway, a spill out area to encourage activity outside Fleming’s café, removal of barriers and protection of the forecourt with bike parking, benches and trees.

The carriageway would be visually narrowed using two colours for the road area.

He said: “Many options have already been explored. These have included finding extra off-street parking, one-way systems and wholesale relocation of the centre.

“Such options all appear to be either impractical, unrealistic or undesirable. The long-term strategy for the village centre aims to create a sequence of interlinked squares or clear spaces facing each group of shops.

“The first of these should front the village hall to form the centrepiece. Further measures could be introduced in phases, working westward along Wood Lane, eventually extending to all of the shops and businesses.

“Lighting, new trees and relocated planting anchor these spaces and keep the shop fronts clear. The vehicular path is maintained, but visually narrowed by the surface treatment and by contrasting surfacing for parking/delivery bays and bus stops.”

Mr Hamilton Baillie said it was essential the area is reclaimed as a public space. He wants to discourage on-street parking and keep the area as car free as possible.

To help define the village centre there would be new designs to the entrance to Wood Lane, at the junction with Peppard Road and Kennylands Road and Reades Lane.

Mr Hamilton Baillie suggests these would be used as “bookends” to identify the central part of Wood Lane as a special area.

He proposes a directional roundel on Peppard Road to point people towards the village centre. “The conventional highway approach would be to introduce a mini-roundabout at this location,” Mr Hamilton Baillie said.

“However, experience from places such as Poynton indicates that a standard piece of hard traffic engineering should not be required at this location.”

Other changes are also proposed for each end of Peppard Road, entering and exiting the village, to help control traffic speeds on the B481.

Mr Hamilton Baillie said: “The simplest of these is to remove the centre lines, and to reduce the apparent widths of the carriageway by inserting generous ‘edge strips’ along both kerbs. In effect they can serve as informal cycle lanes.”

Changes at the Wood Lane junction with Reades Lane and Kennylands Road would see a central paved feature created.

The turning into Reades Lane would be narrowed and different paving and street levels would be used to mark the area. This would help reduce speeds and stop drivers cutting through Reades Lane.

Mr Hamilton Baillie suggests a redesign of the road layout in Reades Lane to focus on a creating a joint space as part of the school and the recreation ground in the field opposite the school. An oval would be created around the road and provide a forecourt for both areas.

He says the changes should be integrated gradually and start with the centre in Wood Lane. He wants to create a network of places and encourage more villagers to walk and cycle.

He said: “In the short term, the focus should remain on the village centre.

“Establishing a general consensus to the placemaking approach would provide the opportunity to work up details with a landscape architect and prepare a first phase based on existing budgets. Subsequent stages can follow as resources allow.”

“Given his past success, there was no better person to turn to and I hope the residents of Sonning Common are as excited about the report’s potential as I am.”

The parish council will run an exhibition on the report on June 16, from 10am to 4pm at the village hall. There will also be a presentation by Mr Hamilton Baillie to residents in September.