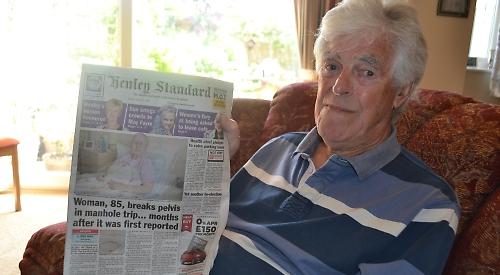 TWO women have been forced to sell their house after one of them fractured her pelvis when she tripped over a manhole cover in Henley.

Elaine Williams says she and Margaret Moola are having to downsize to a bungalow because her recovery is going to take months.

Mrs Williams, 86, spent several weeks in bed following the accident in April and has been prescribed morphine because she is in so much pain.

The women were shopping when she tripped over the sunken manhole on the exit from the Waitrose store (King’s Road) car park, off Bell Street.

It was first raised as a hazard nine months ago but was only repaired last month following Mrs Williams’s fall.

Waitrose has reapaired the manhole and says it is sorry.

Mrs Moola, 75, said they were being forced to sell their home in Sedgefield Close, Sonning Common.

“If it hadn’t been for that accident I don’t think we would be moving,” she said.

“We had talked about the possibility we would have to move but we came to the conclusion we could manage perfectly for three, four or five years but this has brought the whole thing forward.

“The accident has actually acted as a catalyst because we’re getting older and because the stairs have become a real problem for Elaine.”

The women, who run Nottakwire, a community singing group in Sonning Common, hope to buy a bungalow in the village.

Mrs Williams said: “We definitely want to stay in the village because we’re part of it and it’s part of us.”

She is now able to walk with the help of a stick and has returned to conducting Nottakwire.

She said: “I am out of bed and I’m walking but I’m in quite a lot of pain — I’m on quite a high dose of morphine. It’s slow progress and seems to be never-ending.”

The women said they were angry that it had taken Mrs Williams’s fall for the manhole cover to be repaired.

Mrs Moola said: “If it was done in the first instance Elaine wouldn’t have had the pain and suffering she’s had.

“Neither of us has received a ‘sorry’ or a card from Waitrose or anybody else, or some flowers, or some vouchers to use in the shop or anything that says ‘this has happened on our property’.”

The pair, who are waiting to hear from the Waitrose legal department about compensation, have instructed a lawyer.

Mrs Moola said: “I have given him all the paperwork but I’ve not yet signed a contract to proceed. I asked him to hold everything until a date when we wish to proceed.

“I thought it probably was best to hang fire rather than go heavy handed through a legal procedure, to be as reasonable as possible.

“If I don’t get satisfaction from that then I may make the decision to go through with it with the lawyer. He believes we have a case.”

The issue of the manhole cover, one of two at the site, was first raised by David Gobbett, of Elizabeth Close, Henley, in a letter published in the Henley Standard in September and raised with Oxfordshire County Council, the highways authority.

He said his wife Sandra had tripped on one of the sunken covers and fallen, skinning her knee and hands and twisting her ankle.

Mr Gobbett, 83, said he had dropped a letter highlighting the dangers of the manhole covers into the Waitrose customer service desk.

“I said to them ‘I want to be absolutely sure this gets to the manager’ and they said ‘don’t worry, it will’,” he said.

But he heard nothing from the supermarket.

Mr Gobbett, 83, said: “If [the county council] found it was Waitrose’s responsibility then they should have been in touch with them.

“I think the time it has taken to deal with it is appalling. Between them they should have dealt with it months ago and this poor lady wouldn’t have been injured.

“She’s suffering through carelessness and a lack of responsibility for something that was clearly wrong with that road.

“Waitrose only had to read the paper or read my note and should have dealt with it.”

His wife said she had been shopping in Henley on the day of Mrs Williams’s accident and spotted her being helped by members of the public after her fall.

Mrs Gobbett, 62, said: “I thought ‘it’s that manhole again’. It is appalling that somebody else has fallen as it should have been fixed months ago.”

A Waitrose spokeswoman said it was in direct touch with Mrs Williams and wished her well.