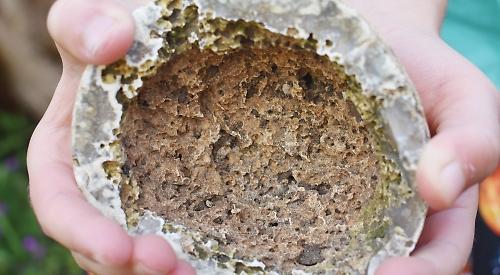 A GIRL found a fossil in her garden that is about 100 million years old.

Ottilie Jenkins, six, was searching for rocks to paint when she came across a spherical one in a flowerbed at her home in Reades Lane, Sonning Common.

She showed it to her mother Becky who noticed the rock was hollow on the inside with a rough surface compared with the smooth outer layer.

She asked fellow villager Professor Ben Cosh, who works at the University of Reading, to pass it on to one of his colleagues to examine.

Dr Hazel McGoff, a lecturer and expert in the preservation of microfossils, confirmed it was a flint which probably contained a sponge or sea urchin from 100 million years ago during the Mesozoic era.

She explained that the spherical stones were used during the Iron Age to hide coins and other valuables.

Dr McGoff then invited Ottilie, who attends Stoke Row Primary School, to the university to see some dinosaur bones, mammoth teeth, meteorites and other minerals and fossils.

Ottilie found the rock in April while searching for some to paint for the Sonning Common rock hunt in which village children decorate rocks and then hide them for people to find. People who find them are encouraged to post a picture on Facebook and then hide the rock again for someone else to discover. Ottilie said: “It was just sitting on the top of the ground. When I first looked at it, I saw the outside and didn’t think to turn it round.

“When I went into the house I turned it round to look inside and realised it was really interesting.

“I thought it could be a dinosaur egg and then we started looking it up.”

Mrs Jenkins said: “We thought it was something unusual but we were not really sure what. It was exciting to find out about it.”

Ottilie became interested in rocks and fossils through her grandparents, John and Jane Loader, who live in Deanfield Road, Henley.

Mrs Jenkins said: “They have Thames stone gravel in their garden and it’s full of lots of little fossils and stones.

“Now Ottilie is always looking for things. When she is doing forest school she is always picking up stones. She is doing her best to find quartz because of how interesting it looks.”

Ottilie has collected hundreds of fossils and rocks, which she keeps in bags around the house.

She has also taken them into school to show her classmates. She said: “My teachers really liked them.”

Mrs Jenkins, who is married to John, a web developer, and has a three-year-old son Arthur, said she had also liked geology when she was a child.

“But I did not have the in-depth knowledge that Ottilie has at her age,” she said. “She has liked collecting things from a young age. She would pick up anything if it looked interesting and she has just continued to do it.

“We weren’t surprised when her teacher asked her what she wanted to be and she chose archaeologist, although she has changed now and wants to be a geologist.”