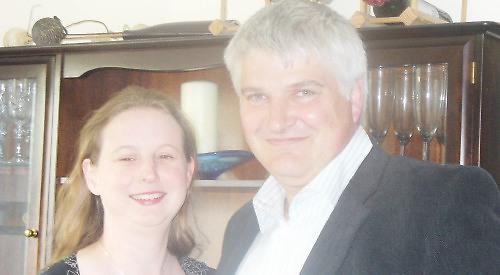 A GRADUATE from Sonning Common raised £2,740 for Brain Tumour Research in memory of his father.

He was invited to visit the charity’s research centre at the University of Plymouth, where he used to be a student, with his mother Juliet and brother Jamie, 18, to place a tile on its Wall of Hope.

Each tile on the wall represents the £2,740 it costs to fund a day of research.

Mr Legg’s father Nigel, a software engineer, died from an aggressive brain tumour just six weeks after being diagnosed in 2012. Since then the family have raised more than £6,000 for the charity and have placed another tile on the Wall of Hope at its research centre at the University of Portsmouth, where Jamie studies computer science. Mr Legg, who lives with his family in Lambourne Road, said: “I know Dad would be really proud. Vital research is taking place and it’s extremely important to me that it continues as this is the only way a cure can be found.”

His mother said: “Fund-raising for research into brain tumours is a cause extremely close to my heart and I’m so proud of my sons for helping to raise money.

“It’s touching that we have a tile placed for Nigel at both our sons’ universities.”

Michael Thelwall, head of community fund-raising for the charity, said: “We are really grateful to Michael, Juliet and Jamie for raising vital funds to support important research into a disease which affects so many people and their families each year.

“Stories like Nigel’s remind us all that we cannot allow this desperate situation to continue.”