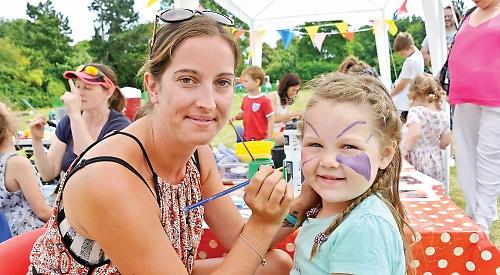 A RECORD £6,000 was raised at the Sonning Common Primary School summer fair.

More than 500 people flocked to the school in Grove Road for the annual event, which is organised by members of the school’s parent-teacher association.

Attractions included stalls selling plants and bric-a-brac, games such as beat-the-goalie and hook-a-duck, welly-wanging, a coconut shy, bouncy castles, a lucky dip, silent auction, raffle and a barbecue and bar.

There was also a photography competition for children with the theme “Look around, what do you see?”

Many of the pupils performed for the crowds, including the year six jazz band, the key stage 2 choir and the school glee club. The year one and year two children demonstrated Maypole dancing.

Helen Simic, who chairs the association, said: “It was absolutely fantastic and the amount we was raised was outstanding. It’s normally around £4,000.

“The event was supported by all the pupils and their parents.” The prcoceeds will go towards materials for the school, including interactive whiteboards.

Mrs Simic said: “All the money raised will go on the children and things they need.”

Headteacher Chris Hurst said: “It was a lovely relaxed afternoon in the sun, being entertained by our talented children and having a good time.

“We are so lucky to have a committed team of mums and dads who are willing to give up their time to help raise funds for our school.” This year the association has already paid for new maths resources for the whole school, a new interactive whiteboard, a storytelling workshop and £200 for each teacher to spend on their class as well as the refurbishment of the garden area for the year six children.