Pub hosts another Big Bash in memory of landlady 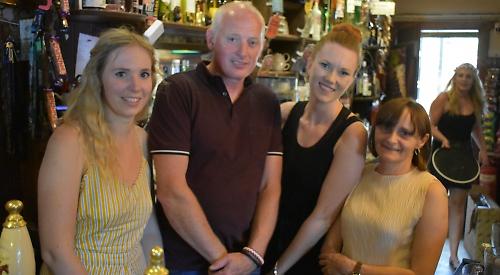 MORE than 1,000 people attended the Big Bash 2 in Sonning Common.

The music and beer festival was held at the Butcher’s Arms pub for the second year running in aid of Sue Ryder and Beating Bowel Cancer.

The event was in memory of landlady Ellie Gallagher Blues, who died of cancer in July last year, aged 46.

It featured more than eight hours of live music across the afternoon and evening with performers including From the Echo, Electric Colts, Who is Smith?, Jodi Anderson, Better than Life, Lucy/Rees, Shakey T, The Angels’ Share, The Ironics and Ben Cosh.

The music stage was compered by Matt Beech and the DJ was Tom Lawrence. There were two outdoor bars, a hog roast, barbecue, treasure hunt and face painting for children.

Mrs Blues’s husband Rob, who still runs the Brakspear pub in Blounts Court Road, said he expected the event to have beaten the £4,500 raised at the first event last year.

He said it would now become an annual event for the community.

“Everyone seemed to be having an amazing time and the feedback has been positive,” said Mr Blues. “It’s a great opportunity for the community to come together. It’s something for the village.”

Mr Blues thanked the volunteers who helped, including members of Sonning Common Cricket Club who ran the cask ale bar.

Some of the pub’s regulars and local businesses helped keep costs down by sponsoring different parts of the event.