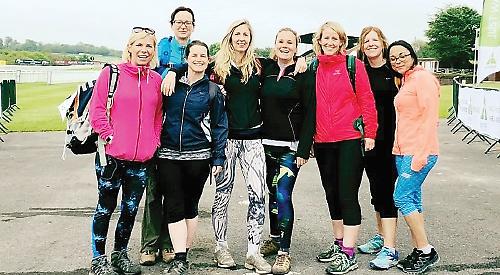 EIGHT mothers from Sonning Common Primary School raised £4,500 for charity with a sponsored hike in the countryside.

They spent 12 hours trekking on the South Downs, starting and finishing at Goodwood racecourse in West Sussex, as part of an event called Just Walk. They were raising money for First Days, which helps families in Berkshire living in poverty.

The walkers included Katie Skilton who has been a trustee of the charity for four years. The others were Andrea Jones, Debbie May, Aimee Laming, Kate Jones, Emma Lawrence, Laura Davis and Lauren Applebey whose children will begin year three at the primary school in Grove Road next month.

The women had to put up with six hours of torrential rain during the walk, having done most of their training in dry conditions.

Mrs Skilton said: “It would have been beautiful if it hadn’t been for the rain. We set off at 8am and were aiming to be finished by 10pm but the rain was so bad we went faster.”

The proceeds will be used to pay for and distribute clothes, toiletries, school uniforms, equipment, furniture, toys and books to hundreds of families in need.

Mrs Skilton, who plans to run the Reading half marathon for the charity next year, said: “We had been talking about doing some sort of event and I managed to convince them to do the walk. They are still holding it against me every time a toenail falls off!

“The charity is absolutely desperate for people to do community fund-raising for it.”

The school, which is a partner of the charity this year, has raised about another £1,000 with events including a day when pupils paid to wear their pyjamas at school.

To make a donation, visit
www.justgiving.com/firstdays-childrenscharity