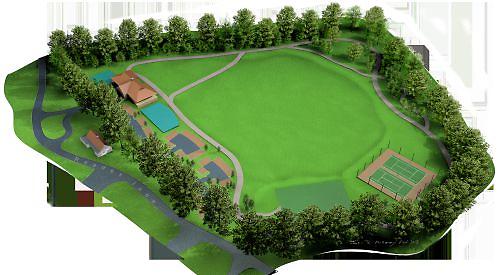 AN ampitheatre-style playing field could be created at a new recreation ground in Sonning Common.

Work to level the site of Memorial Field, off Reades Lane, opposite Maiden Erlegh Chiltern Edge School, is due to begin later this year. The work will be paid for by developer Linden Homes, which is set to build 50 homes on a neighbouring field known as Sonning Grove.

The land was donated to Sonning Common Parish Council by the Pelly family and the developer in return for supporting the housing scheme.

The recreation ground could include a track for walking and running, an outdoor gym, multi-sport zones, tennis courts, a picnic space, rehabilitation areas, a coffee stop, hospitality space and parking,

The “ampitheatre” would be created by having a raised footpath around the edge of the field.

Diana Pearman, who chairs the council working party that has been working on the project, said: “The land has been farmed for many years, so to develop playing space with appropriate drainage and utilities will take considerable investment and sensible planning.

“The working title for the land is ‘Memorial Field’ because of its position behind Kidmore End Memorial Hall but we would like to think of a new name for this space and welcome suggestions.

“First thoughts on what Memorial Field might look like have led the group to suggest that, rather than flattening all the land, which would require substantial soil removal and possibly create a more urban look, the existing undulations could be embraced to create more of an amphitheatre style.

“Sensitive planting around an accessible peripheral track would provide an activity setting which is more in harmony with the surrounding landscape.” Mrs Pearman, of Kennylands Road, said the recreation ground meant residents could feel they were getting something in return for agreeing to the development of 200 homes in the village over the next 10 years.

She said: “We have never had a recreation ground and most villages have some sort of space for a recreation.

“Some people did not want more homes in the village. We have convinced people it was a good thing for us and the recreation ground is an important part of that.

“It’s going to be a huge benefit for the community. One of the overriding factors in deciding on facility provision will be the enthusiasm and willingness of local people to support their use and maintenance.”

One of the key aims of the Sonning Common neighbourhood plan, which passed a referendum in September 2016, was a new recreation ground.

The plan said it wanted “to secure land for and encourage the provision of identified shortfalls in healthy recreation facilities for all age groups and particularly for older children and adults”.

Mrs Pearman, who is also a member of the neighbourhood plan working party, said a study of the likely effect on traffic in Reades Lane would be carried out.

It was hoped to create paths from the village centre to the recreation ground to make it accessible to people on foot, bicycle and mobility scooter.

She said a feasibility study would be carried out by sports consultant Dougal Nicholl, from Chieveley, whose former clients include the Rugby Football Union, the Delhi Commonwealth Games in 2010 and Napoli FC.

Mrs Pearman said: “He was recommended to the parish council for his wide-ranging industry experience in the financial feasibility of building and managing sport and recreation facilities.”

He will work with On Your Bike founder Penny Snowden, who will co-ordinate information-gathering from residents.

The information will be used to support the business case for the recreation ground and will help with grant applications to bodies such as Sport England.

Mrs Pearman said: “The reason we were allowed the piece of land in the Chilterns Area of Outstanding Natural Beauty was because it was recognised that it would make a difference to the village. We are a hub for all the little villages around us. The study will take into account the information we have gathered and how people are feeling.

“We can put it into context with Sport England and how they are viewing sport, health and exercise.”

An exhibition of the plans will be held at Sonning Common village hall in Wood Lane on Saturday, September 8 from 10am to 3pm.

Once the business plan has been completed and all the information has been put together, a planning application covering access, layout and buildings will be submitted to South Oxfordshire District Council.

In the meantime, permission will be sought for the groundworks.

Mrs Pearman added: “The applications for the buildings and the access will be the second stage.

“I hope it would be done early next year. We would like to move forward with it as soon as we can but it can take a long time.”