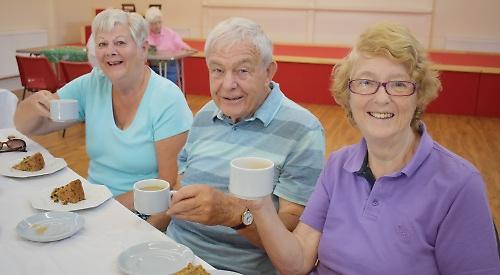 A COFFEE morning in Sonning Common organised by an amateur athlete raised £300 for charity.

Villager Jess Brown, 28, staged the event as part of a series of fund-raising challenges she is undertaking in memory of both her grandmothers, who died of cancer.

She is raising money for Macmillan Cancer Support as well as St Wilfrid’s hospice in Chichester and the Donkey Sanctuary in Devon.

She decided to take on 30 challenges involving friends, colleagues and relatives before her 30th birthday on June 18, 2020.

She began by running 5km every day in April and also completed the Oxford town and gown 10km. In June she rode 300km on a bike in a day and in July she completed Ride London’s 100-mile cycle around London and Surrey.

Miss Brown said: “The whole idea is to do the different challenges with different people involving the community.

The coffee morning was designed to involve the community. Miss Brown said: “I’m really pleased with the amount we raised. It was a really good morning and we had a steady stream of people coming in.”

Tomorrow (Saturday) she will take on the Isle of Wight half marathon. Other forthcoming events include a Land’s End to John O’Groats cycle ride from August 28 to September 9, the Berlin Marathon on September 16 and the Budapest Marathon in October.

She also hopes to complete the Reading half marathon, the Thames Path Challenge and the Brighton marathon as well as the Three Peaks Challenge. Miss Brown, who works in education research, is a former rower who was part of an Oxford Brookes University women’s eight that competed in the British and European University Championships.

She said: “Rowing training was fairly full on and I was missing having something to work towards. Most of these events I’ve never done anything like before so I’m not sure how they are going to go.”