Bride walks down aisle on crutches 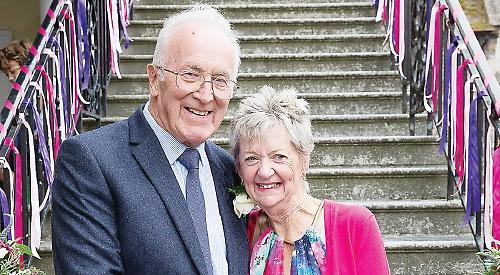 A WOMAN walked down the aisle on crutches on her wedding day only weeks after breaking her leg and suffering a stroke.

The ceremony at Wallingford town hall took place exactly 21 days after she was injured in a fall when the couple were visiting Blenheim Palace.

Mr Godfrey helped his fiancée back to their car and drove her home to Birch Close in Sonning Common despite her being in pain.

When her condition had not improved the next day he took her to the Royal Berkshire Hospital in Reading where doctors discovered her leg was broken in three places.

Two days later, she underwent surgery to remove floating fragments of bone from her leg and have metal pins and plates put in her knee fixed at a 30-degree angle.

Mrs Phillips-Tilbury also suffered a stroke which doctors said could have been caused by the anaesthetic before the operation or the break itself.

However, the couple, who were both widowed two years ago, refused to cancel their plans. The wedding ceremony was attended by 50 friends and family members.

The bride, who was in a knee brace, entered the venue to A Love Until the End of Time by Placido Domingo followed by I’m Gonna Be (500 Miles) by The Proclaimers.

She wore a floor-length, colourful “fairytale” dress from John Lewis in Reading and her crutches were decorated with pink ribbon.

The new Mrs Godfrey said: “The song by Placido Domingo is romantic so I kept everyone waiting until it had finished. I wanted them to hear the whole thing.

“When I did walk down to 500 Miles everyone started laughing while I was gripping on to my two crutches. They were all clapping and shouting.

“It was as we had planned it but even better. There was complete euphoria because all the people who were there wanted to be there. There was a huge outpouring of love for us both.”

Mr Godfrey said: “I turned around and started laughing myself and then we sang the rest of the songs to ourselves.

“It was a lovely afternoon. The town hall there is such a pretty little place. We chose it because it was small and intimate.

“The ceremony was beautifully done. When they declared us man and wife people were cheering and clapping. I have never heard anything like it.”

Among the guests were the couple’s five children and 10 grandchildren. Mark Manson, the groom’s son-in-law, from Shiplake, read The Art of Marriage by Wilfred Peterson and Alistair Johnson, the bride’s son-in-law, from Emmer Green, read A Walled Garden.

The flowers for the wedding were provided by Erica Cunningham of Brambles Florists in Sonning Common.

After the ceremony, there was a reception at the Waterfront Café in Benson, where the couple had their first date. They then went home and had a cup of tea.

The couple got to know each other as Mrs Phillips-Tilbury received financial advice from accountants Kench & Co in Station Road, Henley, where Mr Godfrey’s daughter Linda Manson works.

The new bride said: “Last autumn Linda asked what I was doing in the village and I had a big Russian dinner I was doing for Sue Ryder.

“She said her dad might like to come. I had sold out of tickets but because I liked her I thought I would stick him on the end of a table. We had a chat, then a cup of tea and quickly fell in love.

“We really liked each other and spent more and more time together.” Mr Godfrey proposed while the couple were on holiday in Florida earlier this year.

He said: “Someone had asked me if we were an item before we went to Florida so I had to ask Chrissie. I was not really sure what being ‘an item’ was.

“When we were there I just asked about getting married and she asked if I was proposing. I said ‘if you like’ and that was it.”

Mr Godfrey, who still works occasionally as a flight examiner at Enstone Flying Club, near Chipping Norton, took her to Blenheim Palace to see the Battle Proms.

They were leaving when he stopped on some steps to look at a Spitfire.

Mrs Godfrey said: “He put his feet in the air and we both fell down the steps. Derek wanted to go to the John Radcliffe Hospital but I said we should just go home.”

He said: “She was being brave but the next morning she said ‘you better take me to the hospital’.”

At the Royal Berks she had an X-ray which showed her leg was broken in three places.

Mr Godfrey said: “They could not believe she had walked 200 yards to the car on a leg with three breaks in it.”

The operation was successful but after going home Mrs Godfrey was having problems with her vision so she returned to the hospital where doctors told her she had suffered a stroke.

Mrs Godfrey said: “The first night in the hospital I was in an absolute panic. I started with my first memory and went through everything from primary to grammar school, jobs, degree, my children and right up to now.

“My memory is fine apart from the immediate things, which are the hardest to remember. There are certain words I can’t remember one day and then they will come back the next.

“I do our phone number every day because I can’t remember it or my new surname. It’s a bit embarrassing to have been married for only a few days and not remember my name!”

The couple had planned to take a cruise in the Mediterranean next month but postponed it while Mrs Godfrey recovers.

They have received more than 70 cards to congratulate them on their marriage and wishing Mrs Godfrey a swift recovery.

“This village has been amazing,” she said. “When Michael died I had to thank the village for their love, care and concerns and it felt like the arms of the village were around me.

“The same thing has happened again. People have been so genuinely pleased for us.

“I’ve got friends who are on their own saying there is still time for them to find Mr Right!”