Back to base for transport charity volunteers 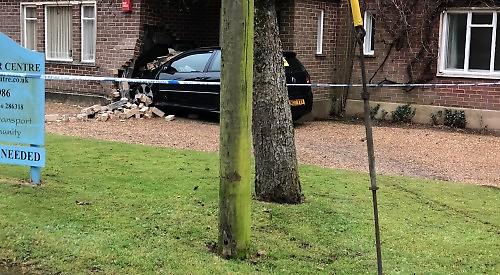 A CHARITY in Sonning Common has moved back into its base eight months after it was forced out when a car drove into the building.

The Fish volunteer centre has returned to the ground floor of a house on the corner of Kidmore Lane and Kennylands Road after repairs that cost £29,000.

Volunteers and staff for the charity had been working out of Christ the King Church hall in Sedgwell Road since the incident in December when a Volkswagen Golf ploughed into the front of the house, leaving the building unusable and unsafe.

The driver fled and has not been traced by police. Builders spent about six weeks carrying out repairs and most of the areas used by the charity have been deep-cleaned and redecorated due to the amount of dust and debris caused by the crash.

The new-look office, which has new furniture, was officially re-opened by Richard and Jane Hemphill, the son and daughter-in-law of Dr Peter Hemphill and his wife Jill, who live in the main part of the house. Also present were Clive Mills, chairman of the charity, Mary Norris, the charity’s office co-ordinator, and fund-raiser Fred Nickson.

Mr Mills said: “The volunteers are really pleased to be back here. This place is our home. We have to thank Richard and Jane, who helped us a lot with the insurance company and getting this done.

“The church has been absolutely fantastic too and could not have done more to help us get back in business.” Mrs Norris said: “We are so grateful to the Hemphills for bending over backwards to get us back here.

“The church has been tremendous and very accommodating but this is our home. The office here has the parking and everyone knows we are here and some like to come in to see us.”

The building housed the village surgery from the Fifties until 1972 when the health centre opened in Wood Lane, where Dr Hemphill worked until his retirement in 1985. Fish has been renting the ground floor office and meeting room since 2014.

The charity, which was founded in 1979, has 400 regular users, mostly in Sonning Common, Kidmore End and Peppard, who require recreational and shopping trips and to visit hospital. It also runs a befriending service.