Gallimore heroics not enough for Highmoor 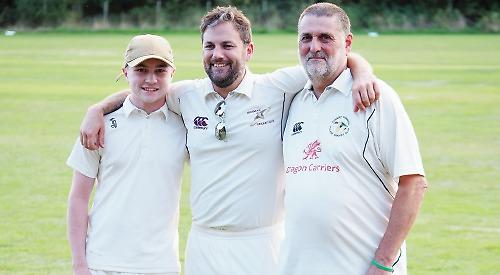 Conditions were perfect for this annual fixture, which were a far cry from those experienced last year.

The visitors batted first and despite losing two early wickets to J Abbott, they scored at a constant rate throughout their innings, reaching a commanding total of 196 runs off their 30 overs.

Skipper Chris Pitson then picked on some loose bowling and hit a variety of shots in a quick-fire 46, not out while being well supported by Dan Slater.

As the home side were short of players, Sonning Common’s vice-captain Chris Gallimore volunteered to play for Highmoor at the last minute and made the top score of 45 runs against his own teammates with some hearty blows.

Ian Harris also made 18 runs but it was the pace of Markland Tidswell and the spin of Mike Cann that kept the hosts in control.

After Jeff Harris was out, wickets fell quickly and Sonning Common completed victory without any alarms.

After the game, Mel Choules presented the trophy to Sonning Common skipper Chris Pitson and the man-of-the-match award went to Jeff Harris.