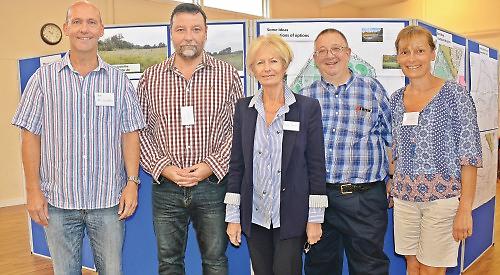 MORE than 200 people attended a public consultation meeting on plans for a new recreation ground in Sonning Common.

Members of the parish council and the Memorial Field working group were on hand at the village hall on Saturday to talk to residents about the proposals and exhibit artist’s impressions.

The recreation ground will be created on the field off Reades Lane, opposite Maiden Erlegh Chiltern Edge School, and would feature an amphitheatre-style playing field. The site is earmarked for leisure use in the Sonning Common neighbourhood plan.

Work to level the land will begin later this year but it could be developed in stages to include a track for walking and running, an outdoor gym, multi-sport zones, tennis courts, a picnic space, rehabilitation areas, a coffee shop, hospitality space and parking.

It could also include a community building, ice rink or even a swimming pool but these would require funding from South Oxfordshire District Council and national grant bodies such as Sport England as they could cost up to £10 million.

The levelling work will be carried out by Linden Homes, which is set to build 50 houses on the neighbouring field called Sonning Grove. The land was sold to the parish council by the Pelly family and the developer for a token £1 in return for supporting the development.

Feedback from Saturday’s event will be used to prepare the business case for the scheme before a planning application for the groundworks is submitted to the district council next month.

Diana Pearman, who chairs the working group, said the visitors were encouraging about the plans.

She said: “We are at the start of an incredibly exciting journey and know it will require a major fund-raising effort. People move to Sonning Common for its family and community atmosphere, accessibility and character and end up staying for generations. Now we have the opportunity to develop the village’s continued focus on health and wellbeing by creating a recreation facility for everyone, which the village has never had.”

Leigh Rawlins, a parish councillor and member of the group, said: “This will be very much a long-term project to be delivered in phases. There is a lot we could do with the site but we couldn’t do it all straight away and right now our focus is on access, groundworks, car parking and so on.

“We hope it will be in use for sports in a couple of years and maybe have a few buildings on it within five to 10 years but it could even take 20 years to get everything in place.”