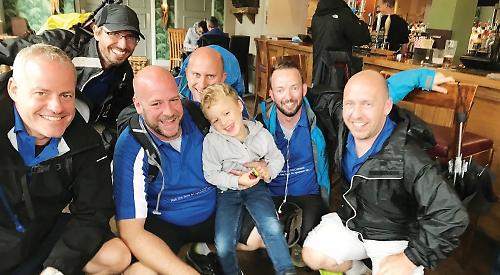 A COUPLE from Sonning Common are raising money to adapt their home for their son, who suffers from a debilitating disease.

Alex and Lisa Clarke need to make their house in Wood Lane Close easier for five-year-old Ben to get around.

He was diagnosed with Duchenne muscular dystrophy a year ago and is slowly losing his ability to move and breathe independently.

The Clarkes, who also have a one-year-old called Zak, also need to buy Ben an electric wheelchair, which he will soon need.

All the money raised will go towards his future wellbeing and development needs.

Mr Clarke and five friends completed a 50km walk at the weekend and collected more than £8,000.

He said: “My wife and I have been absolutely blown away by the support we have had from our friends and family.

“People have just put their hands up and offered to help in ways we could not have imagined. Their generosity with their time and money has been unbelievable.

“We are so thankful and grateful. When you’re dealing with a life-changing situation, which are we, it certainly makes things a lot more manageable and easier to deal with when you’ve got people like this by your side. It restores your faith in humanity on a number of levels.”

Mr Clarke, 42, met his fellow walkers at antenatal classes before Ben was born and they became friends. They are Angus Burnett, Paul Kelly, Stuart Connelly, Jack Taylor and Daniel I’Anson, who all live in the Henley area.

The six men walked along the River Thames from Long Wittenham, near Dorchester, to the Little Angel in Remenham Lane on Saturday, battling persistent rain and heavy wind during the challenge.

They sat off at 7.30am and passed through Shillingford, Wallingford, Moulsford, Goring, Pangbourne, Purley, Reading, Sonning , Shiplake and Henley on their way to the pub.

When they arrived at 6.15pm they raised their arms and cheered before celebrating with a meal with family and friends at the pub.

The walk idea was conceived by Mr Burnett, who encouraged the others to join him before telling Mr Clarke that he would be required too.

They initially planned to walk from Trafalgar Square to Henley but realised that would take too long.

Mr Clarke said: “The rest of them agreed to it without my knowledge and then decided I was going to do it as well.

“The 50km route was a challenge but something local to us and made the most of what was nearby.

“The conditions were tough but there was amazingly good banter and chat all the way along. Everyone was supporting each other, which helped us to get through.”

Mr Clarke said he and his wife wanted to thank his friends and their supporters.

“A good 60 per cent of the donations are from people that have never met Ben or us,” he said.

“Needless to say if they did meet him they would happily part with their money because he is an amazing little guy.

“The donations speak volumes for the guys who took part and the type of people they are. Every single penny people have donated will make a difference to Ben’s life.” Ben, a student at Trinity Primary School in Henley, was diagnosed on August 31 last year.

Duchenne muscular dystrophy is one of the most common genetic disorders in children and usually only affects boys. Most children with it are not expected to live beyond their early twenties.

The Clarkes had noticed that Ben often fell over and after one particularly bad fall they took him to their GP. He was referred to hospital and diagnosed soon afterwards.

Mr Clarke said: “Your world comes to a standstill and everything stops because life had changed in one phone call.

“It was and continues to be incredibly challenging. My wife and I have reached a point now where it’s living each and every day we can with him.

“It’s about having a positive outlook and making sure he has as many positive experiences as possible.”

The family moved from Henley, where they have lived for 10 years, to Sonning Common in July. Their new home will be easier to adapt for Ben’s needs. The changes will include making the ground floor navigable when using an electric wheelchair by widening the doorways.

Ben’s new bedroom will need to be on the ground floor and enable his wheelchair to move around it. He will need his own bathroom and special bed.

Mr Clarke said: “We still want him to be able to access all the living areas where we do family activities, so he can sit at the dining table or the kitchen and have a cup of tea with us.

Mr Clarke said the walk also helped raise awareness about the condition, which affects about 2,500 children and young men in the UK.

He added: “Ben is like any other five-year-old. He is full of life and energetic but gets tired very quickly and can’t walk on his own for a long distances.

“We want to raise awareness about Duchenne and it’s one of the reasons we did the challenge.

“You could speak to 100 people and 98 of them will have never heard of it. It’s about making people aware there is this horrific, catastrophic and life-changing condition.”

The friends have agreed to hold a fund-raiser every year.