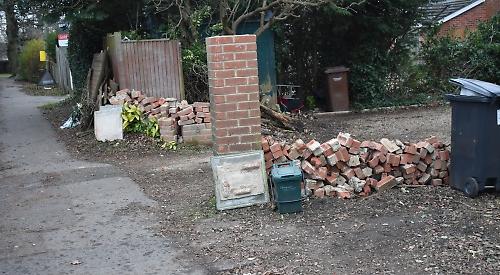 VILLAGERS have told how they tried to save a man’s life after a van crashed outside their homes.

The former professional footballer was a passenger in the silver Ford Transit van which left the road and collided with parked cars, a bus stop sign and the boundary walls of several houses before coming to a stop in a front garden.

A man who was driving the vehicle has been charged with causing serious injury by dangerous driving and remanded in custody.

Linda Woodward and her neighbours rushed outside after hearing the crash at about 10.30pm on Thursday last week and found the badly damaged van in her driveway.

Ms Woodward said: “I heard the most enormous bang. The neighbours came out and we called the police and ambulance.

“I gave first aid to the passenger. I stopped the bleeding and held his head up.”

Heidi Snookes-Owen, who lives in Wood Lane with her husband Anthony, said: “We heard a loud crash bang and scrape and my husband said a car had just turned over.

“The whole road was covered in glass and bits of car were scattered across the road. The wall had gone, there were bricks all over the place and lots of glass. The bus stop was gone as well.

“We realised there was a passenger in the van so our attention turned to that and an ambulance was called.

“Linda was with the passenger and I was on the driver’s side with a torch. You could see he wasn’t breathing very well.”

Mrs Snookes-Owen added: “It was quite shocking really. We were just pleased that no one else was injured while standing at the bus stop or coming in and out of their driveways.

“There are lots of young children and teenagers here so it’s fortunate no one else was involved.

“It is usually very quiet in the middle of the night as the buses have stopped and most people are home.”

Another neighbour, who didn’t want to be named, said: “None of us realised there was a passenger until after a few minutes. The neighbours moved bricks away from the driver’s door and the ambulance crew got a stretcher and pulled him through to the driver’s side to get him out and in to the ambulance.”

Matthew Baker, who lives in the street with his wife Clare and their two children, said: “My wife and I went to bed at about 10pm and were drifting off when we heard a big smash.

“We went outside and saw what had happened. We were there within a couple of minutes.

“There was quite a lot of noise. The van had hit a car and gone through a wall. There was a lot of debris all over the road. It was quite horrific, especially as it was right on our doorstep. It could have been any one of our houses.

“We have got the bus stop opposite which does tend to slow people down. It was just pure luck that nobody was walking along that path at the time.

“It was a real shock. My two kids walk to school so I drummed it into them to keep their wits about them.”

Mr Baker, who left the scene because it was too crowded but watched from a window at home, said the police clean-up operation went on until about 4am or 5am.

Michael O’Reilly, who lives in Wood Lane with his wife Cathy, said: “We had the window open and heard a pretty almighty bang.

“Cathy came downstairs saying there’d been a crash and when we went outside there were heaps of people. There was glass strewn up to where the van had landed and the car that was hit had been shunted a full length.”

Mr Seymour, 47, who was living in Sonning Common, had played football for Coventry City and Milwall.

He was also on the books at Southampton and gave evidence last year at the trial of former club coach Bob Higgins accused of indecent assualt on teenage boys. Higgins was convicted of one count and faces a retrial on 48 more later this year.

More recently, Mr Seymour was an ambassador for the Offside Trust, which was set up to support victims of abuse in sport.

The group tweeted: “We have lost a brave and lovely friend. We’ll miss you, Billy.”

Former England international Trevor Sinclair tweeted: “Devastated. Always had a special connection with Billy from our Lilleshall days. Condolences to his family and loved ones.” Floral tributes to Mr Seymour were left at the scene of the crash, some with messages of condolence.

One read “love always” and another said “fly high”.

His family have been informed and are being supported by officers from Thames Valley Police.

Police are investigating the circumstances surrounding the crash and are appealing for information or footage. Anyone who can help should call 101.

Alexander Clarke, 38, of no fixed abode, has also been charged with driving while disqualified, failing to provide a roadside breath test and driving without insurance.

He appeared at Reading Magistrates Court on Saturday and was remanded in custody to appear at Reading Crown Court on Monday, February 4.