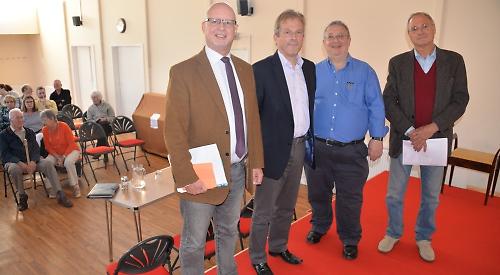 A MAN standing in local council elections urged residents to vote for an opponent at a hustings in Sonning Common, writes Axel Fithen.

Lucio Fumi, representing the Liberal Democrats, said they should back independent candidate and parish councillor Leigh Rawlins to represent the village on South Oxfordshire District Council.

The other candidates competing for two seats on the Sonning Common ward was David Bartholomew and incumbent Paul Harrison, for the Conservatives, as well as David Winchester, for the Labour Party.

More than 25 people attended the event at the village hall in Wood Lane on Thursday last week, ahead of the election yesterday (Thursday). Mr Winchester was absent for personal reasons.

Clive Mills, chairman of the Fish volunteer centre, chaired the hustings. Each candidate was given 10 minutes to explain who they were and why they were standing.

Mr Fumi introduced himself and spoke about his thoughts on Brexit before he endorsed Cllr Rawlins.

He said: “I would not be the right local candidate to be honest with you. I put my name forward when the Lib Dems asked me.

“I think Leigh is very close to the position of the Lib Dems and much more experienced than I am. He is very competent.”

Councillor Bartholomew spoke about his role on Oxfordshire County Council and why he doesn’t think party politics has a place at local level.

He said: “I have been out speaking to planning committees, supporting the neighbourhood plan where we have been under attack by ferocious developers.

“When my own county council wanted to close down Chiltern Edge School, I said I am not going to let this happen. That school was kept open and became part of the Maiden Erlegh Trust.”

He added: “If you elect me I will be there working for you and I will ensure your priorities are my priorities.”

Councillor Rawlins said: “I particularly focus on planning. Unfortunately the district council has been riven by divisions within the leading group.”

He went on to criticise housing targets and proposals for increased housing density across the county and around Sonning Common.

Councillor Harrison spoke about his time on the district council for Henley and also Sonning Common, where he also served on the parish council.

The candidates were then asked questions from the floor.

Parish councillor Douglas Kedge asked if they would have any issue working with each other.

Cllr Rawlins said: “I would have no difficulty working with David. He tells me the truth. He thinks about the issues and he is prepared to stand out from the crowd and do his own thinking.”

David Drew, of Kennylands Road, asked Cllr Harrison if he would ignore the views of parish councillors from villages in the ward at the district council. In February, Cllr Harrison was accused of this in Shiplake.

Lyndsay Henderson, of Sonning Common, asked how the candidates would tackle environmental issues.

Cllr Harrison said that he and the district council supported a proposal to declare an environmental emergency and that electric car charging points had been introduced in the King’s Road car park in Henley and also in Wallingford.

Cllr Bartholomew admitted that what councils can do is limited, but added: “I am a great advocate of taking a rational and holistic view relating to managing waste and carbon generation.”

Cllr Harrison said he had asked the district council to investigate imposing a compulsory purchase order on the property, which would bring it into its ownership, and the chief executive was in favour of it.

Sonning Common parish councillor Brian Giles asked about illegal and nuisance parking in the village and how it could be tackled.

Cllr Rawlins said: “I strongly support the idea of localised parking enforcement powers. The police have almost turned away from parking as an issue.”