Man wins garden contest no thanks to wife (a judge) 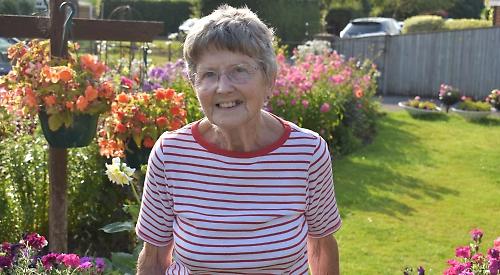 A MAN won Sonning Common’s summer front garden competition — with no help from his wife, who was a judge.

Charlie Stevens was honoured for his colourful display of plant pots filled with flowering annuals.

He and his wife Maureen have lived in Inglewood Close for 13 years but this was the first time they had been put forward for the competition.

Mr Stevens, 88, said he used to do much more gardening but had to give up due to his age so he came up with an idea.

“At the beginning of the year I thought, ‘I will do something with the pots out there’,” he said.

“Eventually we went out and bought some plants at the garden centre and stuck them in.”

The 20 pots are filled with plants including geraniums, begonias and lobelia in a mixture of blue, red, pink, yellow and white.

Mr Stevens, a former antiques dealer and builder, said: “All the neighbours said it was lovely and an eye-catching display.”

The four judges, including Mrs Stevens, 85, visited all 14 gardens nominated for the competition, which is run by the Chiltern Edge Horticultural Society.

At her house she abstained from the voting, which consisted of scoring the gardens against a number of criteria including first impression, the variety and choice of plants, the colour layout and tidiness.

Mrs Stevens, a member of the society’s committee, said she was pleased for her husband and felt there was a number of reasons why his display won.

“We might have been a bit later putting our plants in,” she said.

“Also we probably had a bit more colour in our garden than the majority of the others.

“It was the general impact and colour. We had reds and yellows and pinks all in together. You wouldn’t mix up those colours with clothes but with plants you can.

“Charlie had no idea how big some of the plants were going to get in these little pots.

“That lobelia — it comes out in a big ball! The plants were about the size of a thumb when we got them.”

The couple said it was nice that villagers cared about the contest.

Mrs Stevens said: “When you see people that have just got gravel in their front garden you think ‘what a shame’. When I had a dog, we used to walk around looking for nice gardens.”

Joint second place was awarded to David and Vivienne Wardle, of Ilex Close, and Ron and Vera Strong, of Green Lane.

Mrs Stevens said the judges liked the Wardles’ garden, which is planted up with salvias and cosmos, because it was “pretty” and not “flash”.

Mr Wardle, 80, said: “I’m quite surprised really. I have always enjoyed gardening and being outdoors. It’s just an excuse to go out and keep myself busy.

“It keeps me off my backside to be honest with you but the trouble is you are never satisfied.”

Mrs Strong, 83, said: “I love gardening. I’m a carer for my husband, so when I come out I can just lose myself.

“Everybody who passes stops and you have a chat. It’s usually about the garden.

“Gardening is one of those things: if you like something, you enjoy it. I thoroughly enjoy it. It’s very satisfying, especially when people comment.”

She said: “You get a lovely view of all the different colours. It’s a very busy garden.”

Third place was awarded to David and Joy Brewer, of Woodlands Road, whose garden has a range of shrubs and clematis.

Mr Stevens will be presented with the winner’s trophy at the society’s autumn show, which will be held at the village hall in Wood Lane on Saturday, September 7 from 2pm to 4pm.