Former teacher learning how to run a village pub 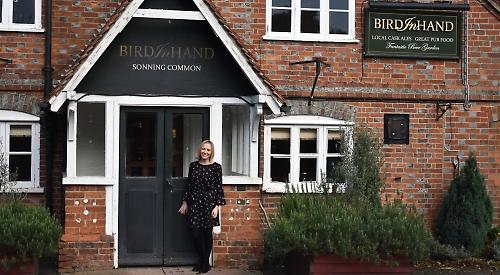 A PUB in Sonning Common will reopen under new management next Friday.

The Bird in Hand in Peppard Road will be run by Helen Blundell, a former supply teacher, and her husband Dan Wilson on behalf of the Ei Group, which owns it.

The pub has been closed since mid-September after the previous landlord Santino Busciglio left to run a seafood restaurant in Cornwall with his partner.

Ms Blundell and Mr Wilson, who used to live in Kidbrooke Village in London, have been redecorating the pub since they received the keys on Wednesday last week.

The bar has been renovated and the pub’s two en-suite guest rooms, are being refurbished. The couple plan to install new toilets in January.

Ms Blundell, 41, said she hopes the pub will became a hub for villagers and would like to host events such as wedding receptions and birthday parties.

“I love the idea of having my own business,” she said. “It is great just to work for yourself.

“I liked the idea of running a pub — there’s something cosy and nice about creating an experience for everybody else. People are saying they are really grateful we are taking over and that the pub is re-opening. We’ve had a lot of really positive comments on social media.

“We’ve also had people pop in to have a look. We’re looking forward to getting to know everybody and welcoming them round to enjoy some good food and drink.

“We want to do something a little bit different but not completely. I think what we are going to bring is a very friendly, cosy atmosphere. We want to engage with the village and for it to be a hub.”

Ms Blundell said she and Mr Wilson, 48, had looked at pubs in London but none compared with the Bird in Hand.

“They didn’t have the garden,” she said. “I also wanted to move somewhere where we could get another revenue stream.

“Pubs are not always doing that well, so we wanted somewhere where we could diversify and get a bit more income.

“We looked in London and Surrey, then Dan and I had a meeting with the Ei Group and they liked our ideas. They were really pleased about the direction we decided this pub needed to go.”

Ms Blundell decided to become a publican as she was tired of working as a supply teacher.

She said: “I thought to myself, ‘this is the last year I’m doing it’. It was just a case of thinking what can I do instead.

“We looked around at a few pubs, and I just got that feeling here. It’s just nice and cosy. I want it to be a home from home.”

Mr Wilson, who used to work at a barristers’ chambers, said he was looking forward to the pub opening.

He said: “We are really looking forward to everyone coming and using it. If anyone has events or anything they want to put on, we are more than happy to look into it.

“The key message is that we are a home from home for everyone. We want people to come and have some great food and beers.

“All our food and ingredients will be sustainable and locally sourced.”

The pub will be open from Wednesday to Sunday each week.

It will serve Birra Moretti, Amstel, Guinness, Simonds and Staropramen as well as beer from the Loddon Brewery and West Berkshire Brewery. The food menu is yet to be finalised but Ms Blundell hopes to serve whitebait and calamari, pigeon, lamb hotpot, fish and chips, and burgers, among other dishes as well as Sunday roasts.

She will also introduce a supper club featuring a starter and main course from about £15. Diners will also be able to make reservations via the OpenTable app.

The couple will keep the pub’s wood fire pizza oven in the garden to use in the summer.

Other attractions will include board games and a book club. There will also be a table with water, treats and blankets for dogs.

One of the guest rooms has a double bed and the other has enough space for a family.

The couple has five staff, including a chef, and they are thinking about getting a dog from Battersea cat and dogs home.

Richard Bentley, regional manager for the Ei Group, said: “What they have done so far is fabulous and I have no doubt that this is going to be a hugely successful business.

“They will bring some warmth, character and a new lease of life back to the pub. We want pubs that are hubs for their villages. That is what we are all about.”