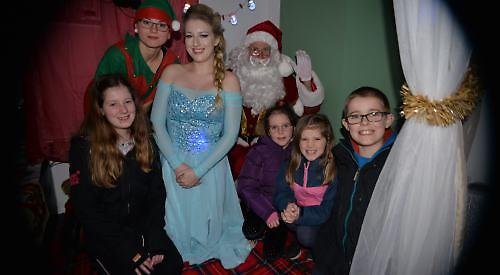 ABOUT 100 people attended a Christmas fair at Bishopswood Special School in Sonning Common.

There was also a cake sale run by Sonning Common Women’s Institute and a grand auction with gifts such as meals for two ahead of a raffle with prizes such as hampers, bottles of wine and biscuits.

Headteacher Janet Kellett said it had been a fun afternoon.

“I think the people that came had a very good time,” she said. “There were lots of things for the children and they could go in and be relaxed and happy.

“It was very busy but it was lovely to see the children bringing their families and new families coming for the first time.

“Some of our ex-pupils came to help out on the stalls and it was good to see them. We would like to see more of them.”

The event raised almost £2,000 for the school in Grove Road and the money will go towards a new outdoor play area.

Part of it will also be used to fund an outdoor gym at its secondary site in Maiden Erlegh Chiltern Edge in Reades Lane.

The improvements are likely to cost about £40,000.

Mrs Kellett said: “For us it’s really great. The amount raised is amazing and really makes a difference. The equipment we have at the moment is quite old.

“The outdoor play area at the primary site needs replacing and we need to do it before it becomes unsafe. The surface area is getting slippy.

“It’s good to have because it develops the children’s play skills and allows them to exercise but it’s at least 20 years old.”