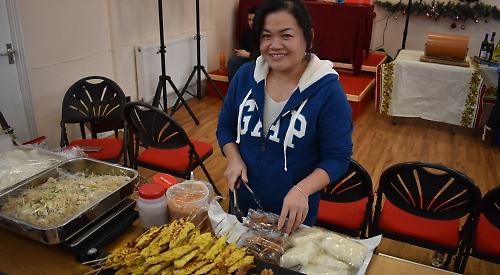 It was organised to showcase the country’s traditional crafts and clothing.

A DJ played disco music and Paul Jenkins, who leads the village’s Christmas tractor run every year, pretended to be Father Christmas.

Organiser Gambhir Raj Khatry, from Reading, had also invited artisans and charities from the village.

Volunteers from the Fish volunteer centre in Kennylands Road sang Christmas carols and held a tombola. They raised about £40.

Books 4 Nepal sold books to raise money for a new library in Jibajibe village in the country’s Rasuwa district and raised more than £220.

Mr Khatry said he had received positive feedback about the fair.

“There was a great atmosphere,” he said. “I loved it because I could see people’s smiling faces and that everyone was happy. It’s nice to bring a little bit of happiness at Christmas time.

“People enjoyed the dumplings, too. They’re one of the most popular foods in Nepal.”