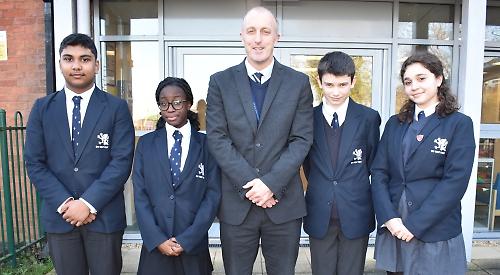 Andy Hartley arrived at the start of this term to replace interim headteacher Richard Hawthorne, who took on the role in September following the resignation of Moira Green.

Mr Hartley, who is married with four children, said he was “delighted” to take charge of the Reades Lane academy.

“To lead a community of young people and see them progress and prosper and achieve their academic ambitions and personal goals is one of the most amazing things one can achieve in life,” he said.

“It was clear to me when I visited the school on a tour prior to the interview and on the interview days themselves what incredible potential lies within the student community.

“All the students I met were articulate, confident and well-presented and one thing that shone through was their pride in the school and what it stands for. From my first visit, I felt this was somewhere that really aligned with my values and what I was looking for in a school.

“The facilities are nice, it’s a lovely semi-rural setting and the teaching staff are great. I want to make sure the students get the best possible deal.”

Mr Hartley comes from Brakenhale School in Bracknell, where he was deputy headteacher for five years and helped it to achieve a “good” rating from the education regulator Ofsted at its latest inspection in January.

He was previously assistant headteacher of the Downs School in Compton for seven years. This included being post-leader, which meant helping many students to secure places at Oxford and Cambridge and the Russell Group of universities.

Mr Hartley said: “We were always very clear on our expectations of students and staff. You can’t do things for one week to change habits, you have to keep doing it. Being positive and optimistic at all times is a massive asset in terms of growth.

“With my knowledge and experience of these matters, I look forward to ensuring that Chiltern Edge students have all the information they need to make the right choices as they move from year 11 to the next exciting phase of their lives.” The school became part of the Maiden Erlegh Trust, a collection of academies, in August 2018, just over a year after being rated “inadequate” by the education watchdog Ofsted and placed in special measures.

Chiltern Edge was then deemed to be improving under Mrs Green, who was interim headteacher in June 2017 before being appointed full time.

Mr Hartley said: “I know the school has been through a turbulent period in recent years but I am clear that progress is now tangible and the school is moving rapidly in the right direction.

“The Maiden Erlegh Trust is a wonderful sponsor and I will be working closely alongside Mary Davies, the chief executive, in ensuring that I maximise the opportunities for further improvement.

“I would also like to publicly pay tribute to Richard Hawthorne, who has been acting head of school since September. The calm and purposeful atmosphere and the loyalty of the students has been, in no small part, down to his steady hand on the tiller.”

Mr Hartley has already made contact with primary schools which feed the academy and has held teacher training.

He said: “I want the school to get back to being a community school and to be able to stand on an equal par with other local secondaries. The biggest challenges will be trying to deliver quality education within the constraints of very limited budgets.”

Mr Hartley said he wanted to develop the school’s sport, performing arts and music and ensure that all pupils can take part.

He said: “I suppose it’s about everyone having the chance to succeed. There’s nothing better than teaching a class of young people and seeing them develop and grow and go on to achieve great things.

“As head, I believe schools should have a range of opportunities and experiences for all their students no matter what their background or ambition. We need to cater for everybody.”