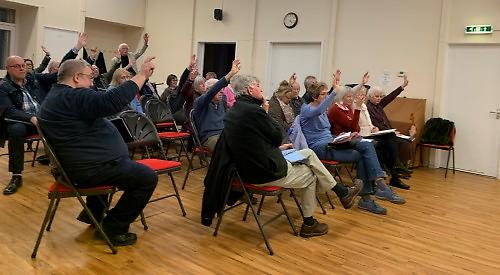 The Henley MP was speaking after a meeting of parish councillors from across South Oxfordshire held at Sonning Common village hall on Friday.

The 30 representatives heard from Eric Owens, assistant director for growth and place at Oxfordshire County Council, about progress of the plans for the £150 million crossing.

The proposal is being promoted by Reading and Wokingham Borough Councils to ease traffic congestion in Reading.

The latter has submitted a strategic outline business case to the Department for Transport.

It has also asked Balfour Beatty, an infrastructure group, to produce a feasibility study based on the current plan for a mile-long bridge from the A4155 near Playhatch to the Thames Valley Park on the east side of Reading.

However, the county council, South Oxfordshire District Council and many parish councils are opposed to the idea because they say the bridge would create more traffic on their side of the Thames with no mitigation measures planned.

Mr Owens said the plans were likely to change and images produced by Balfour Beatty were intended to demonstrate the basic construction methods and were not truly reflective of the design.

Councillor David Bartholomew, who represents Sonning Common on the county council, said: “There is no doubt that they [Reading] have got a traffic problem but the answer is not passing the problem to us.

“We have got this area of outstanding natural beauty and a rural area that we fight so hard to protect. Do we really want another road going through it?”

He said the strategic business case was 600 pages long but only a quarter of a page had been given over to mitigation measures.

Kidmore End parish councillor Sue Biggs said: “There is a lot of talk about this bridge but one of our great concerns is the infrastructure.

“The bridge takes all the traffic from Reading and Wokingham to South Oxfordshire. What sort of modelling is being done to consider about the infrastructure considering it is going into mostly an area of outstanding natural beauty and what are the costs of this?”

Mr Owens replied: “That was one of the biggest concerns we had with the strategic outline business case and the work of Balfour Beatty. We were concerned that the modelling was not extensive enough.”

Councillor Stefan Gawrysiak, a Henley town, district and county councillor, said: “Unless they have mitigation measures for the Oxfordshire side of the water then it is going to be chaos for the villages.

“Therefore, a strong representation must be made that if the bridge is going to be built, there must be a relief road put in at Cane End. The reason why they don’t want to include that is because it will escalate the cost of the bridge.

“It is currently estimated at £150 million and if you put a major road in that costs another £70 million then the whole business case becomes unviable.”

He added: “I still don’t think our concerns are being heard. We have got a seat at the table but there are other people at the table who are just not listening.”

Mr Owens said he was happy that concerns were being listened to and measures were being put in place to address them.

Mr Howell said: “There is absolutely no point in building the bridge unless the road structure on the South Oxfordshire side is taken into account and so far they have not done that.

“The latest business case is utter rubbish and takes no account of South Oxfordshire. They are saying that can be done later on but it needs to be done now in order to understand where the traffic is going.

“I don’t feel they have a full appreciation of the impact on our side. Given that it has not even been thought about, it is not worth considering the bridge.

“Unless Wokingham come up with detailed costings and an assessment of the road network, it is a non-runner.”

Mr Howell will meet his colleagues Matt Rodda (Reading East) and Theresa May (Maidenhead), who support the bridge plan, on March 27.

The meeting was organised by Carole Lewis, chairwoman of Sonning Common Parish Council.