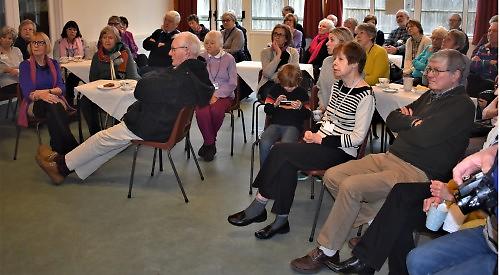 THE Fish volunteer centre in Sonning Common has been asked to help the NHS with patient transport.

The move follows a talk given at the centre in Kennylands Road by Rob Thompson, volunteer services manager for South Central Ambulance Service.

Speaking to about 60 members of the charity, he said the ambulance service sometimes had to pay for taxis to transport people to and from hospital if no ambulances were available.

Mr Thompson said the service wanted to work with Fish, a charity which provides transport for people in the village and surrounding area who don’t have vehicles of their own or are unable to drive.

He said: “The purpose of the scheme is both to enhance the service we provide and to increase the availability of our patient transport service ambulance crews.”

Fish chairman Richard McQuillan said: “The talk was about trying to reduce the number of taxis they have to pay for. When they can’t provide transport they have to use taxis.

“They are hoping to liaise with voluntary driving services like ours so we can help them out.  If we sign up to it they will contact us, saying someone needs to go to the Royal Berkshire Hospital or whatever and we will help them out and they will give us a fee for that.

“I think if it came into force it would be a good thing in many ways but it would produce more work.”