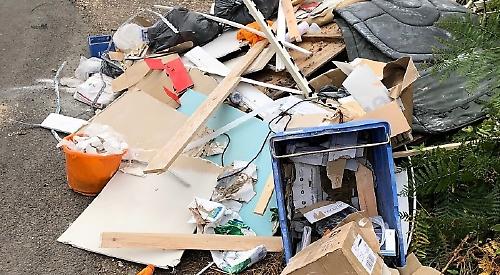 A MAN has been ordered to pay more than £2,000 for fly-tipping building waste in Sonning Common.

Scott Allaway, 34, of Green Road, Reading, appeared at Oxford Magistrates’ Court and pleaded guilty to charges relating to fly-tipping and not having a waste carrier licence.

He was fined £800 and ordered to pay a victim surcharge of £90 as well as being given a community order of 12 months with 120 hours of unpaid work.

The magistrates also awarded South Oxfordshire District Council, who brought the prosecution, its costs of £1,112.

The court heard that Allaway had been working on a property in Goring Heath on August 2 last year and arranged with the owner that for an extra fee of £40 he would dispose of the building waste such as wood, plaster and several black bags, despite him not having a waste carrier licence. He reassured the owner the waste would be disposed of responsibly and then unloaded it on land between Peppard Road and Kiln Road, next to the Bird in Hand pub in Sonning Common.

The fly-tip was witnessed by a passer-by who alerted the council.

Councillor David Rouane, the council’s cabinet member for housing and environment, said: “We take the issue of fly-tipping extremely seriously and will prosecute those found responsible for it.

“We also urge residents to ensure that if someone is disposing of waste for them, they must have a waste carrier licence.”