Families shine lasers and hit pots and pans for carers 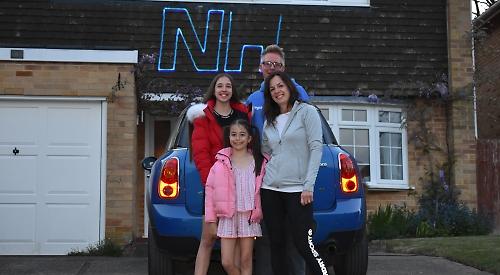 A FAMILY in Sonning Common have used a laser to show their support for NHS staff battling the coronavirus pandemic.

They projected the health service logo onto the side of their house, in Churchill Crescent, during the nationwide Clap for our Carers tribute on Thursday last week.

It was the fourth time the country has paused to applaud health staff and other key workers and it will continue every Thursday from 8pm until the crisis ends.

Claire Wilson and her daughters Jessica, 14, and Esme, nine, managed the laser display with her fiancé Adrian Banks.

They take part in the applause in their front garden every week and last time they projected a message of thanks to Mr Banks’ friend, a paramedic named Mark Turner.

Mr Banks said: “It’s nice to do something for the NHS. We usually use the laser for parties. It’s a really simple programme — you just type in text through your laptop and it projects it.”

Geoff Davis, also of Churchill Crescent, clapped on the pavement in front of his home with wife Laura and their children Isaac, eight, and Elsie, seven. They also banged a pan and tin with spoons to make extra noise.

Mr Davis, who helps run the annual On Your Bike event in the village, said: “There’s lots of brave people out there taking this thing on. They are trying and helping people who need it. I think this has brought out the best in us.”

Katie Steele, who also lives in the street, used spoons to hit pans with her daughters Scarlett, 15, and Annie, 13. She said: “We’re really appreciative of the NHS and it’s personal to us because we have a relative working on the frontline in the Isle of Wight.”

Kathryn Willis, who lives opposite, was joined on the pavement by her husband Richard, son Jake, six, and the couple’s newborn baby Harry. The walkway had a message in green and blue chalk that read “thank you NHS”.

Mrs Willis said: “I was in hospital for five days three weeks ago and they looked after me. They’re all heroes in my eyes for what they’re putting up with at the moment.”